Finally finished the madness of tax season and I was DYING to get out to the mountains with my boy and took the first chance I could! I decided on Barrier lake because, we had attempted to .. well… find it last summer and completely ended up in the WRONG spot, ha-ha, some little loop up no mountain! So this time around, I made sure we found the right spot and – that we did! We weren’t up super early in the morning or anything, which was nice, just took my time getting ready and went and picked up my spawn from his Abuela’s and we were off!

We parked on the side of the road as the parking lot was full, as usual. I could tell it was going to be a hot day. Nolan didn’t want to be put in his carrier at all and tried to fight me as I was struggling to yes, STUFF him in there. Once we got all set up with him in there, I sit down on the ground and strap my self in. Yes, sitting. Remember, he is now 30lbs if not more and the pack has 3L of water in it among extra clothes, food, diapers, wipes and what ever else, so lets just say its 40-45lbs. Not easy to just swing over my shoulder. Once im all strapped up, I am sitting there, wondering how I am to get up. This group of people walks by and two men grab each arm and pull me up laughing, saying “good luck!” I say “see you at the look out” and they just laughed again. You better believe, they never passed us and we DID see them at the top as we were having lunch.

Same thing happens every time I start off a hike with Nolan, I doubt my self, my strength, I cant do this! This is going to be so hard, he is too big now. Then . . . I give my head a shake and remind myself that we’ve done this before and we can and will do it again. Nolan is so supportive in making sure I am drinking my water along the way. He loves the bladder pack and I love how I have two nozzles. He drinks one and says “mami – poma, poma mami!” (He is trying to say TOMA which means take it in Spanish). Even that little bit had me so motivated to keep on going and push harder. My little man had my back the whole way!

It was hard, very hard. I was dripping sweat, and breathing so hard and loud. I did have poles this time which was quite amazing! As we continued to pass people on the way – we got so many compliments, and got called crazy a few times. Nolan said hi to everyone as he always does and loved the trees, the dogs, and how he could see the agua (water) from the top.

When we finally made it to the top, and I took him out and we both had some lunch. There were quite a few people up top having lunch and a lot of people had dogs. Naturally, Nolan had to run up to them all! We took photos and ran around a bit so he could stretch his legs. Definitely made me nervous not having his harness backpack on him up there.

He is so quick now, and slips away from my hand way to easy as I am trying to pack everything up for us to head back down. I thought this time I would try to let him walk down a bit and see how he did, and again, I definitely needed the harness backpack. He just wanted to run down and didn’t understand that he would trip and end up on his face, ha-ha. Something he will learn the hard way I am sure, after all he takes after his mom that way 😛 ! 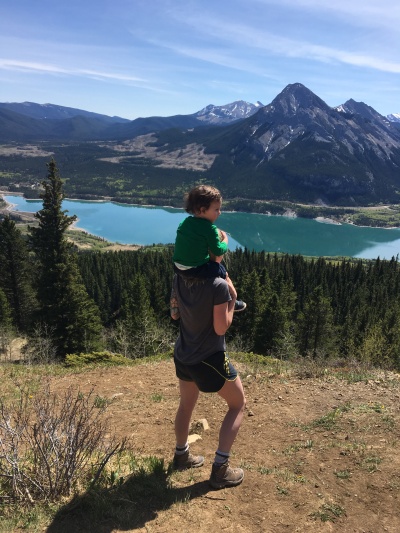 Again, the poles helped a lot on the way down. I feel like this was a big hike for me to do for our first one on the mountain as I had not been hiking with him a whole lot throughout the winter. But! – We did it, we made it up, we made it down, the whole time with smiles on our faces and Nolan falling asleep on the way down as usual 🙂

What will our next adventure be?