It’s a Sunday morning and Nolan and I are coming out the other end of our colds that have lasted about a week and a half! We couldn’t sit at home anymore so we had a great big breakfast and headed to the gym for a workout! After the gym, it was so beautiful outside so we stopped and got a coffee and headed out to Elbow Falls.

I had my Tula carrier all ready for Nolan, but he was adamant about wearing his own backpack which I was THRILLED about! I really wanted to get out to the mountains with him, but I just didn’t have the energy to carry him. Don’t get me wrong, I am super sad that I wont be able to carry my little baby forever, as he is getting so big and heavy, but the way his little hand fit in mine and how we walked the trails together – was amazing! 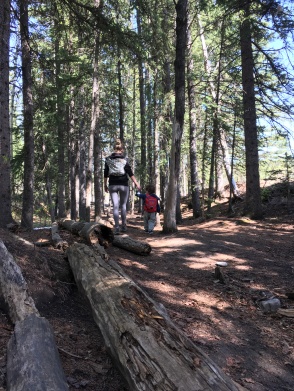 It felt like it wasn’t just me sharing it with him anymore (with me carrying him all the time) – but I got to . . . do it how he wanted to. He shared his adventure with me and it brought tears to my eyes! Happy of course. I am WAY to emotional of a mother, ha-ha, and he just makes me so happy, and I often have to sit back and take a moment as I realize he is his own person and . . . not always going to be glued to my side.

As we started out on our hike – Nolan was very excited on the flat ground. When we came to a dirt, rock – trail that went down, he wasn’t so sure anymore and instantly put his hands in the air, and with a little whimper goes “mama!” Lately I have been trying to get him to at least try things on his own before I do my typical “helicopter mom” thing and swoop in and save the day! ha-ha, I can’t help it! It’s something I am really working on and as hard as it is for me, it’s really rewarding in a whole other way. He learns so fast, and understands what I am trying to get him to do and he does try! And when he does do it on his own – he knows it and it SO proud of himself. THEN I can swoop him off his feet into my arms and smother him in love and kisses, ha-ha and share his happiness and my happiness together 🙂

We headed down to the river for a good chunk of the day and puttered around where ever he wanted. There was a lot, A LOT! – of back and forth, stop and go, turning in circles, sitting and standing, trying to pick up every single rock and stick, petting every dog, saying hi to every kid and more. When he would pick up rocks to throw in the river, I kept trying to move him along slowly. Not rush him, just letting him know that we had to keep going. Eventually we got to the little falls and he was running up the pathway and the stairs to see all the people, and the falls. He could hear them and you could tell he wanted to get higher and higher.

After the falls, we walked in the trees on a trail for Nolan. There were fallen logs all around and over the pathways and he got nervous and again, threw his arms up for mama! I crouched down to his level and put my hands on the log and then lifted one leg over to sit on the log. He was hesitant, and then I asked him to try it just like me, and he did! He looked at me, and put his hands on the log, and raised one leg over and sat on it. We sat there for a minute and celebrated his new conquering of the log! 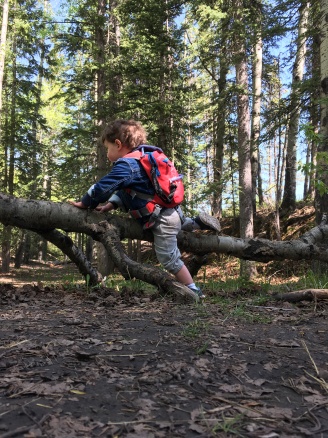 After that, he was ALL OVER the logs, running up to the next one – so excited to climb over. There were some where they were a little high, so I would crouch down and I would get him to step on my hands, or my knee to get up. I would then go over myself, and help him down the same way. 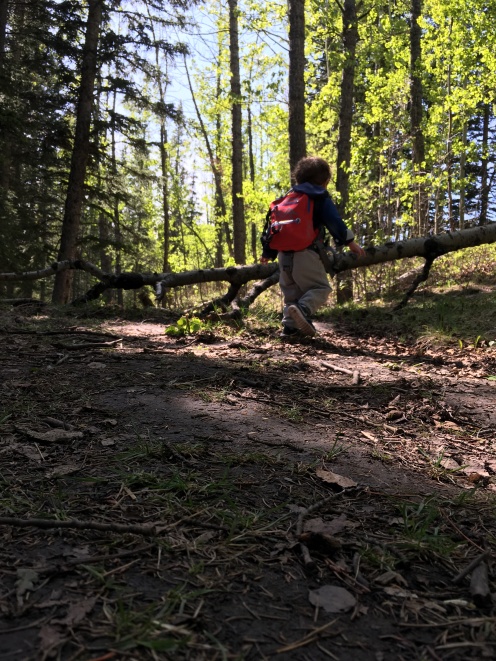 We had such a fun day! I can’t wait for more adventures to be led by Nolan, I can’t wait to see more of how he see’s things. It was the best idea . . and I will definitely be letting him show me the way a lot more now. I don’t need to climb to the highest part of the mountain every time, I am not failing if we don’t make it. I will still try to get him to the tops of some, if I can, but it’s not my priority or main focus any more. He had so much fun on the trails doing his thing, and that’s what we will work on more 🙂 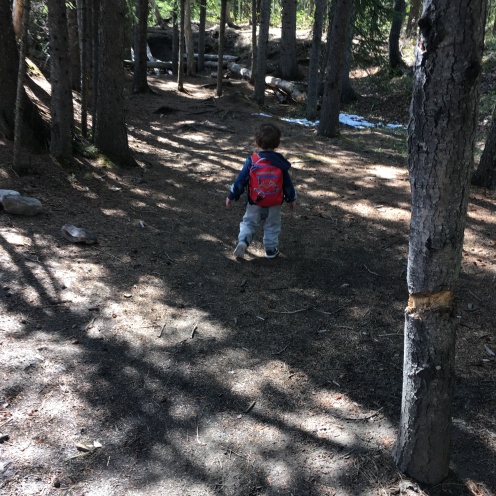 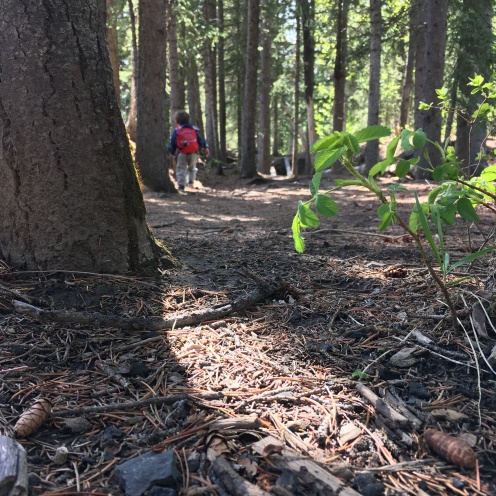