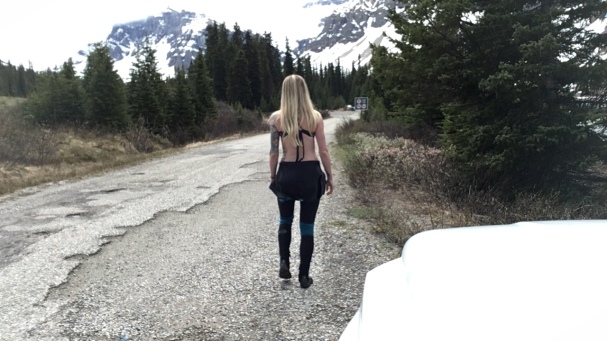 The mission: To hit 5 lakes, hiking in and out of some of our destinations, starting very early in the day and ending with a sunset paddle on our last lake. 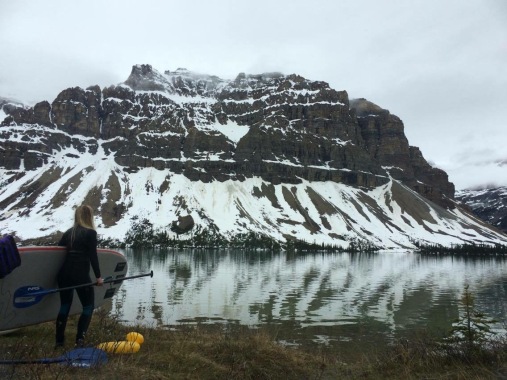 Mission not accomplished! Ha-ha, BUT we did hit two out of the 5 and it ended up being a phenomenal day. We had come to the conclusion early on in the day, that maybe 5 lakes was a little aggressive. Especially as we fell INLOVE with our first location and are totally the types to get easily distracted with anything and everything we could do and see at this location. It was so beautiful, and we were just stuck on the alpine!

Friday night, we met up and picked up our paddleboards and wetsuits. I was definitely hesitant about this trip, and I was looking for excuses to bail. Weekend forecast was rain, rain, and…. more rain, maybe some wind here and there. Definitely clouds and rain! I had read a ton on bears on the Friday, as most of the adventure people I follow have been posting about seeing bears. Hearing about them so much lately, and my desire to get out even more than I have been and spending as much time in the mountains as I can, I wanted to try to educate myself more. 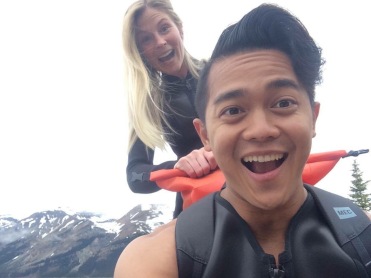 So that freaked me out about our adventure also. the plan was to hike in and out of some locations, and it was going to be cold and rainy, meaning not many people out on trails. I didn’t want to be the only ones out and get surprised by a bear. Sucking it all up, about being cold and wet, uncomfortable and seeing a bear, I packed all my stuff the night before and got a good nights sleep for the awaiting adventure the next day.

I picked my friend up at 6:30AM and we were off! I hadn’t adventured with him since, Nolan and I went to Troll falls! It had been quite a while, and he got into ice climbing this winter and was busy with that. It was so nice to catch up on the drive out, and it was like there was no time in-between. We picked up right where we left off! – LOVE those friendships. 🙂 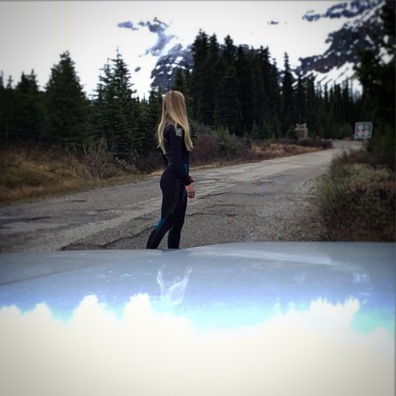 We passed Lake Louise and headed right on Highway 93! I have NEVER been down this highway and instantly fell in love with it. it was hard being the driver at this point, and not veering off the road, ha-ha. I couldn’t stop looking around! Columbia Icefields, I have seen a lot of people post about this location a lot and never knew where it was, and tada! IT’S SO CLOSE! I can’t believe I have been that close to it this whole time.

Peyto Lake was going to be number one, but we couldn’t contain our excitement as we passed Bow Lake, the mountain across the lake, and the alpine! The lake being right off the road, – I did not want to hike in with this paddle board. So we pulled in and parked right by the lake and got ready! 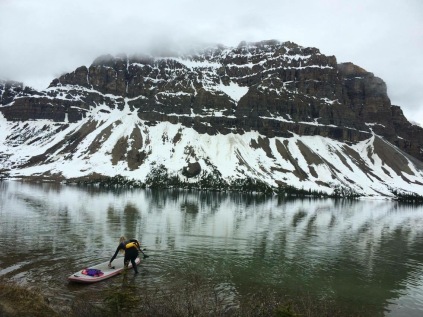 Slipping into our wet suits, blowing up our paddle boards, and getting everything in the waterproof pack back was all we needed to do. OH! – and don’t for get the ducky’s!  they were an important part of the adventure as well ha-ha! Always can count on Indra to have some kind of prop or costume on an adventure 🙂

As we dipped into the water, I braced myself to feel the freezing glacier water of the lake. I stepped in, tensed us and paused, “I don’t feel cold! AWESOME!” The initial first step in was fine, I moved around a bit and then some water started to seep into my booties. It didn’t take too long for it to become warms though, it was quite nice! This had made me even MORE excited! I was ready to take on this day, confident in my wet suit and again, just excited to get out there! Once we got on the water, 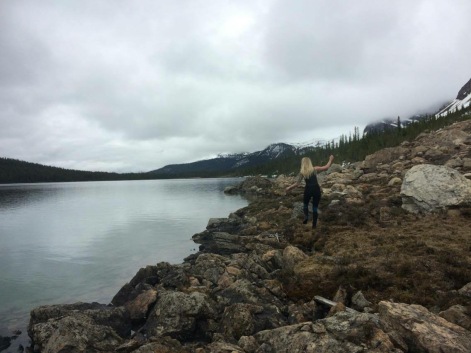 I could see traffic slowly down on the other side of the highway, nearly coming to a full stop. The line up of cars started to get longer and longer. I also caught a glimpse of a man riding along the highway in a bright yellow jacket and a “Parks Canada” or, what ever the wildlife cars are called, going along as well. Suddenly, I catch my eyes focusing on something moving in the bushes! Everyone is slowing down because there is a bear. 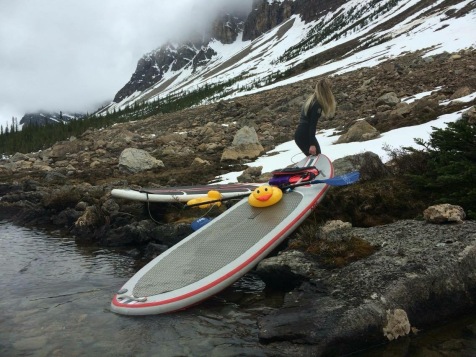 There is a bear, just on the other side of the highway, from where I parked my car. I have never seen a bear before, and it was exciting and nerve racking all at the same time. All I hope for is that he was to heavy to swim across a lake and we were not worth it 🙂 !!!

We took our time paddling across the lake and of course Indra had one of his crazy wild ideas to slide down the snow on the mountain, ON HIS PADDLE BOARD! lol! **HANDS IN FACE**SHAKES HEAD** I said I would have NO part in this, as all I could see was it ending horribly wrong. 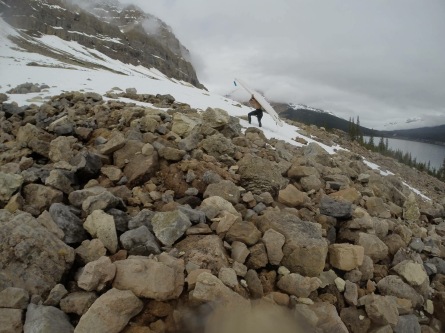 With him either colliding with a large rock, puncturing the paddleboard, or himself! HA! I just didn’t see it going very well. So – I made myself comfortable on a rock for a while and stayed quite entertained as he tried to hike his paddle board up the mountain. Watching him slip, fall through the snow, giggling to myself over and over again. 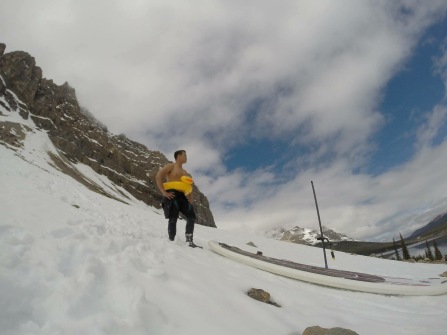 Eventually he made it to a good spot and had to prop the board up somewhere so it wouldn’t slide back down. Then all was set! He managed to get on, and then his duck decided to make its way down first, and he went shortly after. Not as exciting as we had both anticipated, – the snow was not as slippery and more on the sticky side so he had to push him self in some spots.

Once he made it down, he then had to carry the board down over the rocks again. By then, I was back on the water, laying down on my board. The water was so still, and I could heard the Glaciers cracking, and avalanches happening off in the distance. Once my pal made it back down to the water to join me, we enjoyed our lunch on our boards, took in the views and just relaxed for a bit. After lunch, we decided to try to hit another lake.

We wanted to head to Lake Louise, but when we got there, the parking lot was absolutely obscene. I didn’t want to even attempt it – because I know how crazy it is if you are not there first thing in the morning, but Indra insisted ha-ha! We ended up driving to Lake Louise and toured around the parking lot and then decided to leave. I was not even sure if we could paddle board on there as I know people have to pay to rent the canoes.  I really wanted to hit Moraine Lake as I swear I am the only person who has never been there yet! The road was closed still so that lake was out. We decided to hit Vermillion Lakes just outside of Banff. It was not busy at all, which was nice. 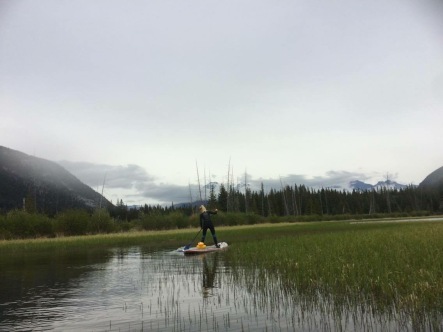 It started to get windy which made it a little harder to keep the board still and stay in the direction you wanted to be in. We realized at the first lake, that we forgot to put our fins on so we were turning way to easily. I didn’t mind it, but Indra was no enjoying it. At Vermillion, we made sure we put the fins on and I didn’t like it! It was so much harder to turn and Indra loved it.

Vermillion was incredibly shallow, and kind of smelly, but completely different views. It was still beautiful and a very nice time. Bow Lake definitely had our hearts for the day though! Once you crossed the lake there – you were right in the alpine, it was just perfect.

I cant wait to get out and paddle some more. Ideally, I would love to get Nolan to sit in-between my legs or just behind me as I paddle us, but at the moment I don’t think he will sit still at all. Of course, he would be wearing a life jacket, but I can only assume most of my time would be picking him up out of that water, or me falling in trying to get him out!

Till the next adventure. . .