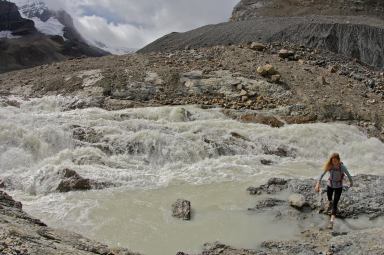 One day after I tackled Temple with an awesome group, I was set out to tackle Cirque Peak with another friend. That was the plan anyways!

My friend picked me up and we ventured out for our two hour drive to the Icefield Parkway. Once we hit Highway 93, we pulled over, put the roof down of that car, and continued on our way just cruising and jamming to some great country tunes. I was so happy, Mountains, roof down and wind blowing, and country music 🙂 Perfect! 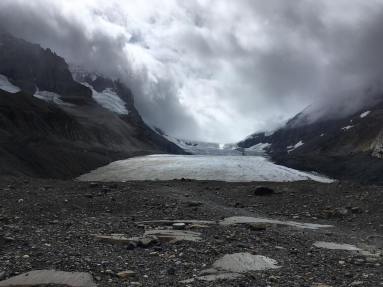 As we were driving down the highway, I mentioned something about only being down this highway once before and only to Bow Lake and I had never seen all the Glaciers, or been to Columbia Icefield. As we kept driving and talking, I eventually asked – So, how far are we from our hike trail head? – and he responded with – Oh we passed that a long time ago, lol we are going somewhere else! –
I didn’t ask any more questions and just enjoyed the ride, fresh air, music and conversation. 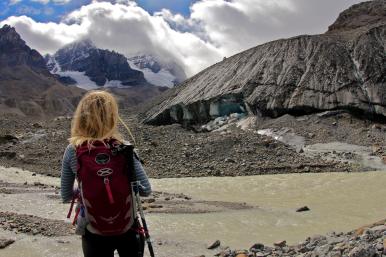 I couldn’t believe how much snow was up here still, how many glaciers there were, DUH! – Icefield  Parkway? good job Kristina. But really, you don’t realize it until you see it. We went inside to the center at the Glacier and my friend took me down to show me the Glacier  model. I was mind blown, that model was huge and showed how many major 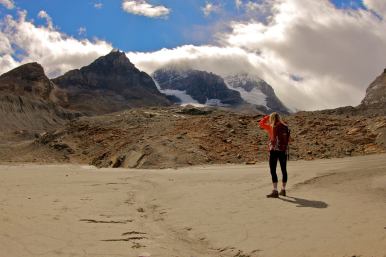 glaciers we were so close to, and how there was probably an entire mountain range buried by a massive glacier behind all that we could actually see. (Is that “Snow Dome?” How all of that – feeds into three different oceans! TOO COOL! Nerd moment for sure 🙂

After our nerding out experience, we ventured out toward the Glaciers. We 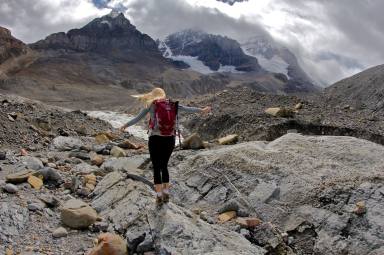 obviously, ventured off the pathway, through the rocks to the river/stream running off the Glacier. We initially wanted to cross the river, stream, what ever you want to call it, to get across to a part of the glacier that was just covered in dirt and rocks,  run off from the mountains above. Through all of that, we could see little ice caves and that’s what we wanted to get to but the water was too much to get 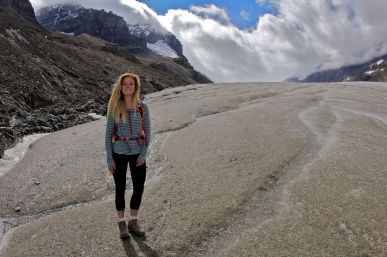 We walked along the water till we came up to the Glacier and made our way up beside the glacier to take some photos. I started to get sketched out because, you don’t realize that under the pile of rocks, is still a lot of glacier! Its not just the big sheet of ice you see in front of you, it extends far under you, under 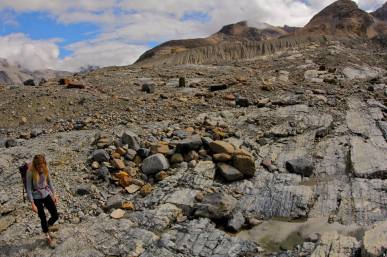 all of those rocks. The noises of the water running underneath you, the cracking of the ice, I was good to stand right where I was and not go any further, ha-ha!

We wandered around for a bit and then made our way back to the car and onto our next spot along highway 93. My favorite spot as we were driving, had to be where you 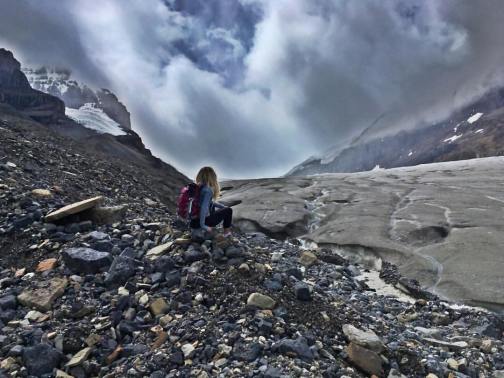 came down one mountain, and did a loop around in a little valley and the continued on. The mountains looked amazing and huge coming down into that loop. One looked like it was just slowly being chipped away at and little sheets would break off. The clouds were hanging low and the sun was trying to shine through – it was beautiful. 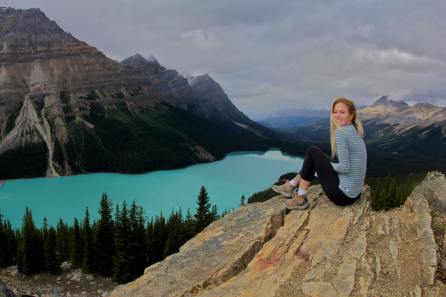 We made our way onwards to Peyto Lake! FINALLY I was able to make it to this beautiful spot. The lake that literally looks like a dog! Its no wonder it is so popular and probably one of the most photographed spots in Alberta, its a two minute walk up to a look out where EVERYONE takes photos. 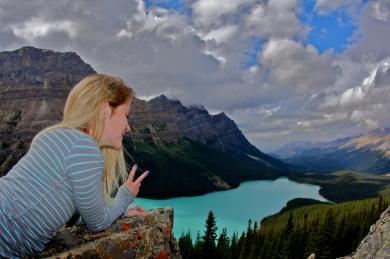 Naturally, we ventured a little further off the beaten path and found our own spot for some peace and quiet, away from the touristy crowds. It was beautiful and we got to climb around on some rocks for a while and got a lot of wonderful photos.

After our little bit of relaxation and lying on the rocks at Peyto Lake, we headed back towards Banff and stopped in to eat some pizza at this AMAZING spot. I cannot remember what it is called, but it was so good. I am not huge on pizza because all the sauce and cheese upsets my belly – but that pizza was too good not to overdo. haha.

Pizza and beer was the perfect way to end the day.