It was another early morning, as usual because that’s the way we like it! Typical to do’s before we hit the highway – coffee (must) and breakfast, then we are off!

It was a nice early morning drive out to Canmore and up to the Spray Lakes road. I’ve never really hiked in snow before, could there really be that much right now? We were to find out!

As we got ready on the side of the Gravel road, looking out on the Spray Lake, the wind just went at us! My hands were quite frozen and I was pretty nervous about the temperature and wind, and we hadn’t even started yet. We bundled up pretty good though and began on our trek. It started out as wider

pathway, and you could see that the pathway was probably commonly used for biking as well. Not to long after we began on the main path, we veered off to the right and the path instantly narrowed and we began to move up! It got steep pretty fast, and for a bit – I really had no idea where the path was. I quickly found out that my boots do not go well with wet slabs! Are there boots that do? Definitely throws off my confidence a bit for sure when I come to certain areas. 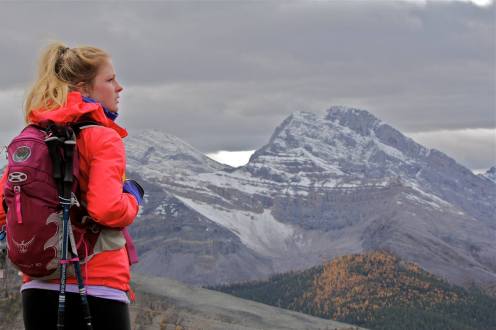 As we climbed, we would look back every once in a while and get a nice view of the lake. I could not believe how big that lake is! And how beautiful the view was! We continued on, every once in a while looking back, because you just have to! For me, the higher I get – and then when I look back – I get quite dizzy! My head just gets so thrown off and I need to just break for a moment and let it sink in that we are getting higher and higher.

seats set up around the pits. There was one group of two men a bit ahead of us, we chatted with them on the side of the road before they headed up first. To our left – I could see two tiny people climbing the mountain across from us! It looked like a long steep walk all in snow to the summit of Sparrowhawk from the way they took. We met them as they came down and said it wasn’t to bad actually. (That was when we were closer to the top).

From that ridge, we went down in between the two mountains and ventured back upwards. It went from nice dirt, grassy, beaten in trail to – rocks! This portion started to get snowy but it was nice. As the snow compacted – it acted more as steps which was nice. Until you stepped off to the side of someone’s step and your foot goes right through –

further than you anticipated. Now you’re on your butt. Or face. I felt a little cluster phobic climbing up this area as the mountain wall to my right was just straight up. I am a slight worrier, so I always think a rock is going to fall on my head. Or I look up and see the top of the peak is out over top of me and its going to fall at any moment. That’s my mind for ya! ha-ha.

We got up the middle of the mountains and met up with the men in front of us. We had our snacks, took some photos, chatted for a bit, put on our gators and another layer as it started to get 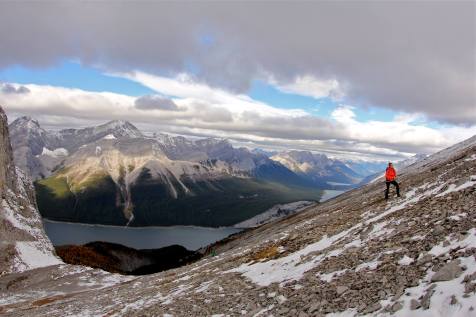 pretty cold up there, and the wind was getting stronger the higher we went. Off we went again – to the left this time. 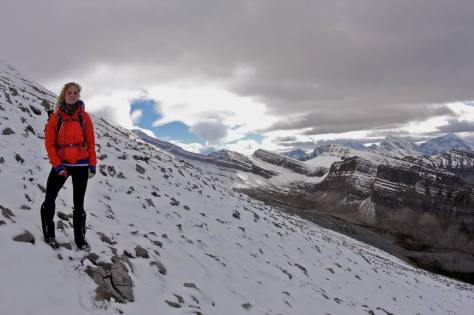 I am not sure how I feel climbing in the snow, is it easier or harder? Again – the snow acts as nice steps once it gets beaten in there, which I do like! but that deep snow sure can make it tough. This part seemed long and tiring. The wind got pretty vicious the higher we got and to the point of literally making me lose my balance with every step. As I have said before – wind scares me! So with each step I took – I was getting tired and thrown off and panicking a little. I could see my friend up at the weather station and I already had it in my head that I was NOT summiting this day.  The men we had seen on the other mountain – told us the summit was slippery and

windy but – they made it! As I came up to the saddle – I ended up one all fours just holding on to the ground and digging my feet into the snow. My friend waves me over and I just look back down to the ground as the snow is pelting my eyes and I don’t move! He comes to me and grabs my hand and pulls 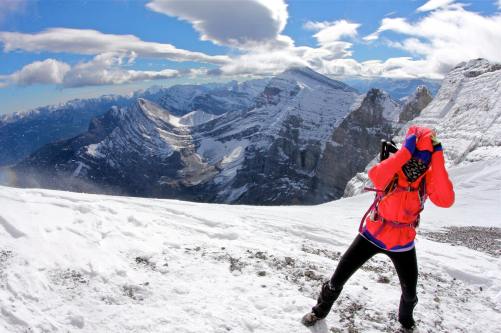 me up to the weather station to hide from the force of the wind.

The view – is beautiful! So, beyond beautiful! I work on calming myself down and he instantly says – “We are not summiting” and I just hug him and say thank you! ha-ha. I know he would never push me and respects 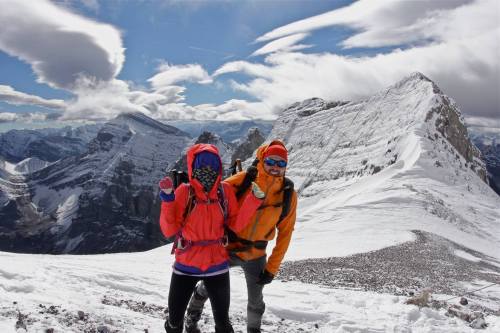 his groups comfort level and ability. That – I am thankful for! I didn’t have glasses, or goggles or anything for my eyes – SILLY! We are huddled in as more people arrive up and try to huddle in with us to. 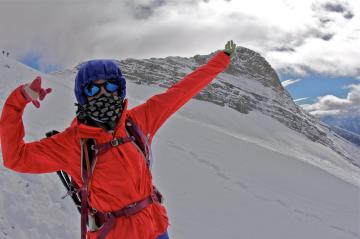 We are all putting on all of our layers, mitts, hats, – everything! Again – we chatted with a bunch of the people for a bit – took some photos and then decided to brace the cutting snow blowing right into our faces, and head back down.

The way down was pretty fun for the first half. The snow made it fun to just, jump down, slide down and run down. Falling wasn’t so bad either! 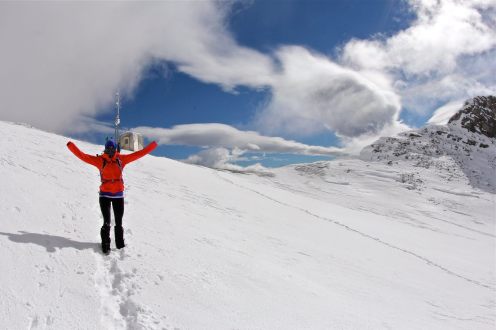 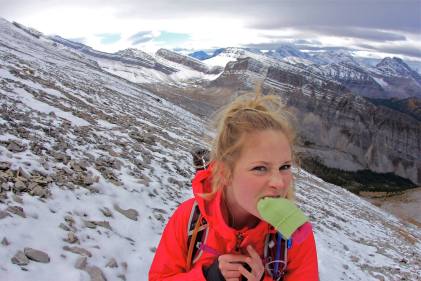 Overall – I enjoyed the snowy hike. My feet stayed decently dry, the gators were amazing – kept my legs warm and dry! and if I did fall and sit in the snow for a bit – I was so hot – I dried off pretty quick. 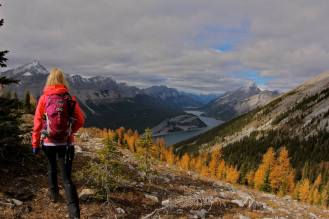 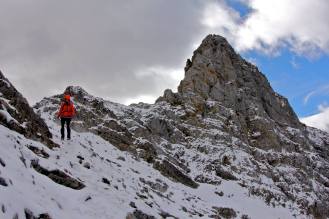 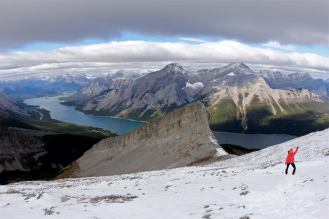 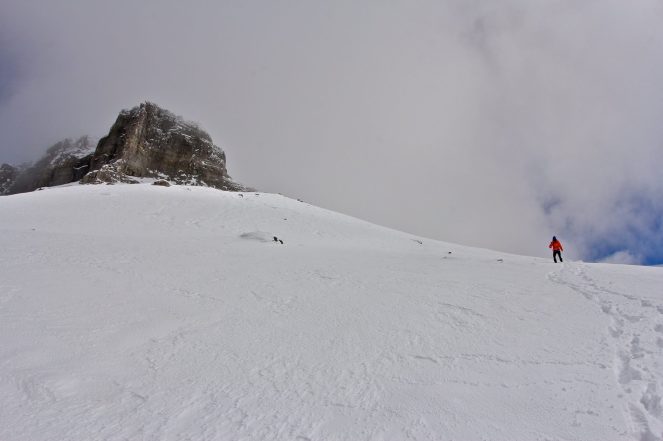 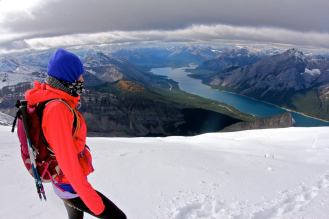