I have always dreamed that one day I would be able to coach my own kid in soccer as my Dad had coached me for basically the whole time I played soccer growing up. From the time I started, through my teens and into women’s soccer. It was definitely weird when I didn’t have him as a coach anymore. I remember we had our battles on the field, many of them in fact. From me thinking he was picking on me because I was his daughter, to him and I yelling at each other from the sidelines and me being in the middle of the field. Him saying “don’t think I wont come out there” and me yelling back at him, and he did, he actually came out to give me hell haha. Lesson learned – don’t test your parents. I was never to most skilled player, fastest, toughest, but I was decent enough I suppose. I love playing goalie, and right or left wing. I do not like defense and I do not like playing the center of the field at all. I still play soccer to this day and I have recently joined a team with a girl I grew up playing with. I played with her and her sister for as long as I can remember and their Dad was always a coach with my Dad, and one of my brothers also played with their brother. 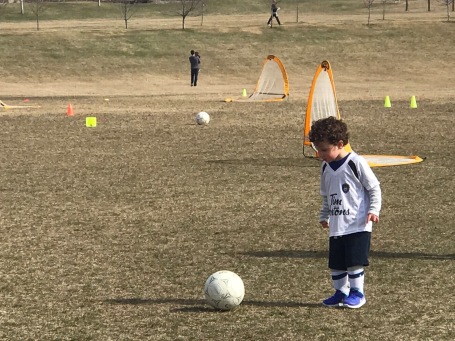 I remember going to tournaments with their family all the time because my Dad would be taking my brothers to their soccer games, or my dad had his own. We were a soccer family!  Now it is just one of the sisters and I playing as the other one injured her knee pretty bad.  Funny enough, the coach I have now, played with my dad years ago for a while and he knew me as a kid! Small world!

Now it is Nolan’s turn. His Dad and I agreed we would put him in soccer when he was old enough. He had come to quite a few of my games this past indoor season and apparently liked it as he started telling me that he wanted to play soccer too! I signed him up a few months prior to the season actually starting and kept tossing the idea back and forth about coaching.
Could I do it? Would I be good enough?

Could I commit? I kept pushing it off. Eventually, a few emails came into my inbox about volunteering positions for the season. I decided why the heck not, what was I afraid of? They needed coaches and I wanted more than anything to do this with Nolan. Few weeks later, the email came out with the schedule and teams and there it was, Head Coach – Kristina Priddle. AHHHH!!!! I know this may not seem like a big deal to a lot of people, or anyone, but the feeling of excitement I felt was awesome. I still feel like a kid most days,  lets be real, all the time. I feel like a giant child haha doing adult things. Now I am coaching my own kid! CRAZY!

Nolan turned 3 in April and that’s when it started. His first game was the day after his birthday and it was hilarious to say the least. Hilarious, chaotic, madness! haha, so many little people running around screaming, giggling, crying, repeat! I knew not to expect to be able to “coach” them right off the bat. There is a lot of running around in circles, running… away! Far, far AWAY!

Running into other games going on, good luck sorting out your teams after that! haha, Crying, hanging off of parents, and to be honest – its mostly from the boys, including my own! The girls are little wreckers, they are so excited to play and get out and kick the ball, it’s pretty cool!

It’s only been a few games so far, and there is about a month left of games. Some of the kids seem to be pretty shy and others are completely out there. Its a fun interesting mix. Seeing how other kids interact, react – other than just seeing how Nolan interacts and reacts to the new thing he is involved in.

Nolan’s Dad comes to his games and I always hope that will help with Nolan hanging off of me buuuuuuuuut it doesn’t! During games some of the parents will run around the field with their kids to try and keep them involved but it doesn’t always happen. Its definitely a learning process, for both!

Kids and myself, trying to coach toddlers. It sure is fun though!

Looking forward to seeing how the rest of the little season turns out and also looking forward to bringing him to some of my outdoor games. AND – playing soccer with him throughout the summer in the field by our house. He loves to shoot on me and run away kicking the ball while I chase him. Nooooooot quite a fan yet of me taking the ball from him, haha “HEYYYYY MAMI THATS MINEEEEEEE” 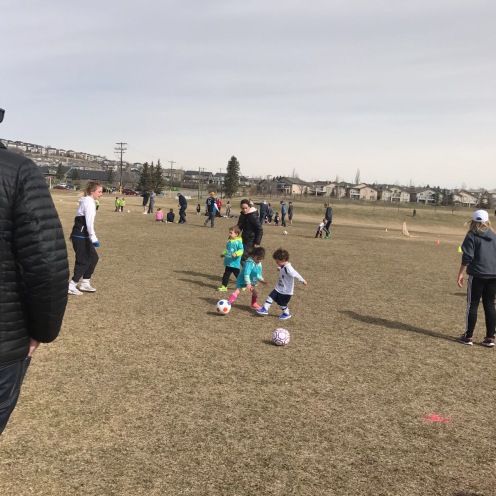