I don’t think I have ever done anything May Long. Growing up – I always had to work. I never hung out with people who wanted to actually camp or do much outdoorsy stuff, and I didn’t get my license until – later than a lot of people, so I was always around home just – hanging around here! Maybe get out to the river for a day or something, but clearly nothing too memorable haha!

This May long, was awesome! I had my son for the Friday evening and I asked him what he wanted to do, and he said he wanted to go climbing or play soccer. As we were making our way outside to decide on one of the two, he saw a plane in the sky and lost his shit, ha! (He just got back from Mexico the week prior with his father and Grandparents and couldn’t stop talking about planes). SO! I asked him again, what do you want to do – Go climbing, go for a walk, go play soccer, go watch planes – and his answer was – solid on the planes! We went and grabbed some chicken strips and juice, plane watching essentials, and headed out to a good spot. It was quite windy but we still popped out the sunroof and wrapped a blanket around us to watch the planes take off and land.

I absolutely LOVE planes, trains, boats, big – big trucks and machinery, just like my boy does! Watching planes has always been a blast for us and such a fun way to spend an evening. We were there for a good few hours and when I looked at the clock it was definitely passed Nolan’s bedtime. 😐 oops! But we had fun! Trying to tell him we had to go home was NOT the fun part, but I managed to peel him off the top of the car and get him in his car seat.

Saturday he went back to his fathers for his week. Saturday was a relaxing day, I went out and walked around 17th avenue with my mentee and we chatted for a few hours. After that, I went home, went for a nice run, had a little work out and then got ready for my evening out with some friends. It was a good Saturday.

Sunday  brought on the mountains! YAY! I originally had planned to just go do some hiking alone as I didn’t think I had anyone to join me. I got chatting with another person over Instagram who I’ve been following for a while now, who also had a little boy, I think he is just over 1 now. He said he would be running mountains and maybe we would run into each other and say hi as we have never met in person. Eventually after deciding where I would be and where he would be – he and his wife and their friends all ended up joining and I had a friend join me also, it turned around to be a great group and a great time!
I drove up with my friend and we all met at the parking lot around 10:30 and got started.

It was really nice to meet them in person and chat all the way the mountain. I love meeting the people I have been following for a while. Some people think its weird but to be honest I have connected and built some pretty great relationships with people I have met off Instagram.

This was my 3rd time climbing this mountain and the first was with Nolan on my back. We were SOOOO close to the summit, out of the tree line, but people were slipping and sliding down and I was just afraid of someone taking Nolan and I out. I was not ok with that. So we turned around. Next time I did it – was New years day 2017 with a group of friends.

We planned on a sunrise hike but it was, new years day, friggin FREEZING and foggy, cloudy, snowy! Crazy weather so we definitely did a quick up and down. I couldn’t see much while we were at the summit. That brings us to this time going up – I finally got to see the views from the summit and I collected my rock for my summit collection! We hung out at the top for a bit, had some lunch, took some photos and took it all in. After enjoying the top, we made our way back down to the car.

There were quite a bit of slips, trips and falls going down as there was still some ice in spots only covered in dirt so it was sketchy. We made it down in once piece, not too dirty! As we were walking back into the parking lot, the other group was leaving and we got to say good bye! Looking forward to another adventure with that group!

On Monday, I got together with a friend and we did Yamnuska for  his birthday! Which is funny, because I have not hiked with him for a year, pretty much the same time last year, and it was also Yamnuska, my first summit ever. I was pretty afraid last year, so I was really excited to see how my fears about hiking mountains has changed over the year. I have done  A LOT of cool things over this past year. We met up and I hopped into his truck and we headed out. It was like we had just seen each other yesterday, our conversation seemed to pick up right where we left off and we blabbed the whole way out, both so stoked to hike together again.

We got to the parking lot and it looked to be pretty busy. We, or I, sunscreened up and we headed out. Last year, we took the wrong way up and a different way down. This year, we had a riot! As we went up, we passed this group of parents with their kids. Maybe 5 adults and what seemed like 10 or more kids. It was a big group and some really little kids to. We didn’t think we’d see them all through the hike but, we did!

I find as you hike, kind of like running, you set your pace and end up linking up with others who have a similar pace. We did just that, and met some wicked people. We met up with these two girls from Calgary, and then another couple – from Calgary.

It was the guys first time hiking the Rocky Mountains – as he was from Australia. When my friend was asking everyone’s names, I heard one of the girls names and shot around and we looked at each other like NO WAY it is you! We met when I was at mount royal, such a small world! We all did most of the hike together, up to the summit anyways. It felt nice to be able to comfort other people who  were uncomfortable with certain parts on the mountain or show them where to grab to get across something, and share my experience and fears about it the year prior. 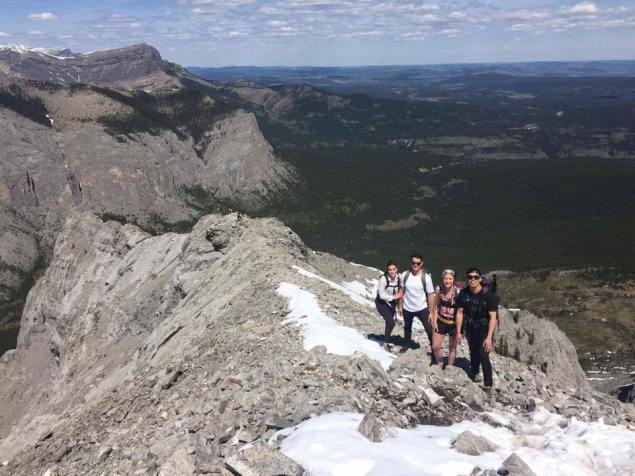 They thanked us for helping them and sticking with them through some spots they may have not felt so good about. 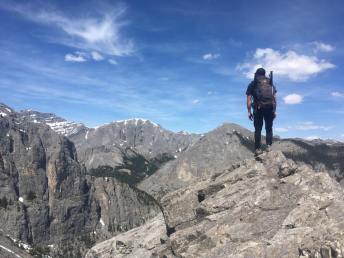 We all arrived at the summit together and had lunch, took photos and exchanged phone numbers! haha! So hopefully we will all meet up again one day. As we were about to make our way down, the giant group of adults and kids arrived! We watched them on the chains as it made us all nervous watching all those little kids go through it. Once they all made it, when continued on. 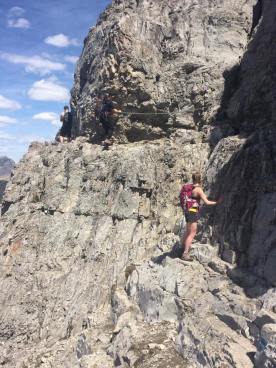 We told the parents how awesome we thought they were, as well as brave for bringing so many kids up! They admitted they had no idea what they were in for but kept trucking along haha!

My favorite part, the skree ski! My friend and I were so excited to share that part with the couple who stuck with us. The other girls went down before us and we didn’t see them until the bottom. The way down was probably, the best decent of a mountain I have ever done so far. We did the skree ski down the back side, and then we did it on the front side also (which we never did on the front last year). We cut SO much time by doing that and had an absolute blast!

So, so, so much fun! Wow! After the skree ski, we found a little waterfall to climb up in and cool off – it was a beautiful little spot to end the day in!

Of course with it being warmer weather now, we got caught up in the heap load of traffic on the way home but we still had a great time! 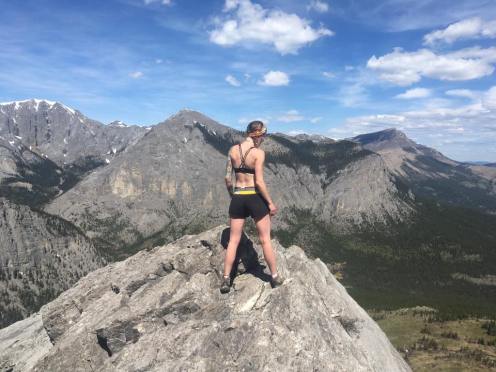