Another weekend with my boy, another adventure to get going on! 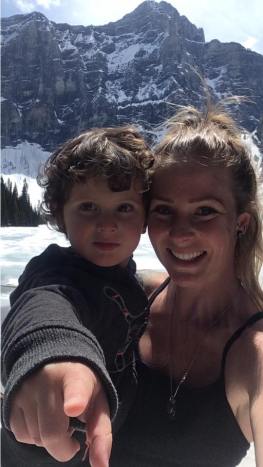 Originally we had planned to go to Ptarmigan Cirque, but the highway was not opened yet. Thankfully, because I didn’t check before we left – oops, the person we were going with suggested Rawson Lake. The turn off was right there and they knew the way, so it ended up working out quite nice.

I had met this guy and his wife in person finally, over May long weekend when I did Ha Ling with them. I didn’t have Nolan that time, bit this time around – I did! On this hike it was Myself, Nolan, and the guy and his son. I was nervous at first, because – I haven’t used Nolan’s big MEC carrier in, probably over a year?! But he suggested I try it again and he would help me adjust it properly. So, I sucked it up and packed all we needed up in the big carrier and tossed it in the Jeep.

Once we got out there, we just took our time getting the kids ready and making sure we had everything packed up. Clean diaper for the littlest guy and good pee in the porta potty for Nolan. “Mami, it stinks in here! My nose feels funny”. I have always been hesitant on hiking with other people when it comes to Nolan and I because, I don’t enjoy feeling rushed, hearing people moan and groan that we are too slow, or having any worries or feeling pressured – at all. If Nolan wants to walk – then he can walk. If he wants to throw rocks in the lake – that’s what we do. This is his adventure just as much as it is mine. I do this WITH him, to SHARE the experiences WITH him. I absolutely LOVE seeing where his little mind and curiosity will take us.

The amount of non-stop excitement this kid has, makes me smile non stop! I get this warm happiness in my chest when he turns around and is so happy, that he has to share his adventure with me.

It makes me stop and take it all in, wow, I am a parent. Not that, I forgot or anything but, this little human is a little me and our experiences together are shaping this wonderful little person. How can that not make you melt!

We all chatted on our way up, the kids enjoying the rocks and the puddles, as little kids do. Eventually after we passed the waterfall, it was time to load the kids into their packs. Nolan was NOT a fan of this. More and more often than not, he wants to walk which has me quite excited, and this was one of those times where he was not ready to be carried.  He still does enjoy being carried though here and there, especially when he is getting tired. That is when he starts tripping and falling repeatedly.

I cant believe I actually carried him up in this pack up to Rawson Lake. Again – its been so long since I’ve used this pack! I was sweating like mad and just taking it slow but we made it! The higher up the trail we got, the thicker the snow got. It was pretty nice to see.

That was until I went post-holing with Nolan, on my back. Its one thing post holing – just yourself. Easy to get out of for the most part. Not this time! ha-ha! I slipped and then went through the snow and fell over onto my right side and sunk even more. Having Nolan on my back and the stuff in the pack – lets say an extra 40 pounds at least, I felt like I got tossed down hard and fast. I didn’t want Nolan to hit the snow or have him laying in it, so I tried my hardest to keep my stomach and face down. That was extremely hard! My friend ran over and basically had to grab us by the straps on my shoulders and drag us up! I tried hard to help him – help us up but I was pretty beat by then!

And we’re up! Back moving! Just laughing the rest of the way to the lake and watching my footing each step I take. Nolan’s sitting back there giggling “Mami you dropped me”  and I said correction Nolan, I dropped us! haha Trying to tell him that the snow tried to eat my leg, and he said that was funny!

We made it to the lake and let the kids out for a bit for some snacks and a break. Nolan, of course, had to pee on a tree (his new thing) and splash around in the mud. The lake was still frozen which was nice to see because last time I was up there, was a hot summer day. I always like to see places during both seasons. It was such a nice sunny day out, and yet the place was covered in snow and ice.

After our break we made our way back down, much faster than the way up. I would like to take Nolan back to this spot or areas around here, like the upper and lower Kananaskis lakes, and others in the area.