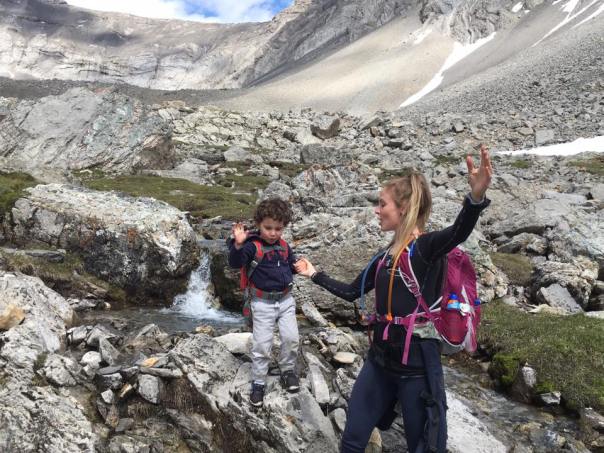 It’s open for the season and we’re at it again! Ptarmigan Cirque has been good to Nolan and I, it’s definitely a special spot for us.

Our most recent adventure there was another one I just have to share! I am so proud of my boy! ❤

The day started out with his wind up soccer tournament, which was a challenge all in itself! These kids, u4 soccer, are supposed to play two games – but then there are bouncy castles! Really? How do you keep a bunch of toddlers focused on soccer when. . BOUNCY CASTLES? Needless to say, all parents and kids from our team left after game one.

We picked up a friend and headed to the mountains! It wasn’t too hot and it wasn’t too cold.  Nolan must have had some kind of stomach bug that weekend because he had to poop every hour it seemed, and when he says “Mami I need to poop” – Mami doesn’t mess around! We pulled over and I was just hoping this time he would finally poop on the grass. (Previous times we have tried, and he just didn’t like the squatting – he thought he was going to fall and he thought the grass was biting his bum ha-ha!) I reassured him I was there to keep him safe and bathroom duty outside was way better!

Note to self: When you tell your kid they need to cover it with a rock after, don’t let them drop it – just saying . .

At the trail and all packed up ready to go. Nolan was eager as ever to get hiking. This had me beyond excited to see what our adventure was going to be like. He immediately took off up the hill and into the forest. Very excited to see snow in the forest, he ran to the first pile and started kicking it. Then onto the next, repeat, and the next, repeat. It was very entertaining, and eventually I found myself doing the same thing with him. 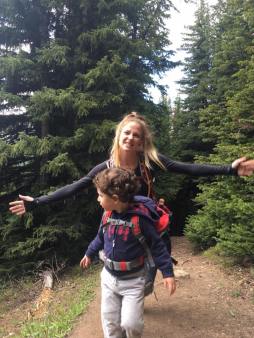 There were a few times he would get nervous from tripping over a rock, a tree root or a big step up, and ask me to carry him. I didn’t want to give into carrying him that easily. Thankfully, our friend had brought along gummy bears and tried to bribe Nolan with them. It worked! He was ready to take on the big steps upwards, over rocks and tree roots, and keep moving. He knew what the reward was and he wanted those gummies. Sharing is caring to Nolan, as he was very insist ant on sharing his gummy bears with me, under the condition I had to bite it from his mouth! We laughed so hard every time because he wouldn’t give it to me any other way and I was following HIS rules! He did so well on the hike up and once we came out of the tree line he let out a big sigh and said “MAMI – MIRA! MONTANAS!” (Look mountains!)

My heart melted, because each time we go out, I see how much more he’s grown, taken in what he’s learned, and how much more he notices things, or takes from each adventure and brings to the next. Watching him is truly mind-blowing.

As we continued on up out of the tree line, when he thought he wanted me to carry him again, the trail flattened out and the views opened up! My favorite part of this hike, it is stunning, and Nolan see’s it – and takes off. Again, this is one of my absolute favorites with him because he can just go. He loves the mountains, the flowers, the rocks, all of it seemed so overwhelming to him, he couldn’t contain his excitement. He had to show me and share with me – everything! 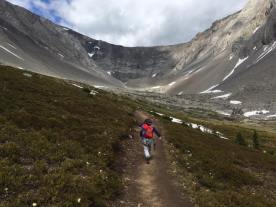 I love watching his little run down the trail, his little backpack bounce up and down, or as he says it his “pack-pack”. His ear for things is crazy, and his sight! I knew there was one water fall around and when we got to it, he had already heard and spotted another.  We had never gone past that first waterfall point, we always continued on with the loop. This time we kept going and I couldn’t see it until we got close and I just remember thinking wow, I couldn’t see that at all for some reason. He picked it out from the first spot. 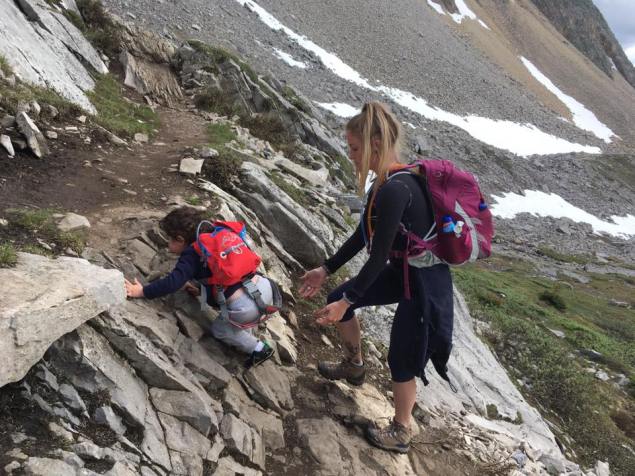 One of the SWEETEST moments, was when we started to get into the bigger rocks and boulders. Nolan says “Mami I am gonna climb this, watch me”, again, my heart is just melting, my eyes are getting watery with everything he does and says and this moment just kills me.

THEN – he says – “ok Mami, its your turn, can I help you”? ahhhh the feeling in my chest just EXPLODES! So I lean in and put out my hands. As he grabs onto them he is quick to say “I got you mami, I got you”! and pulls with all he’s got. He was so proud to help me up and excited to move onto the next part of our adventure. (Totally tearing up as I am writing

What a sweet boy I have, wow! I still can’t believe we are doing all of this together. I give him a BIG hug and a kiss and tell him how thankful I am for his help and how nice that was.

Once again, he is off! We take our time, throwing rocks into the every so clear stream flowing through the cirque. We climb, we jump, we splash, we run, trip, get back up and keep doing it all. 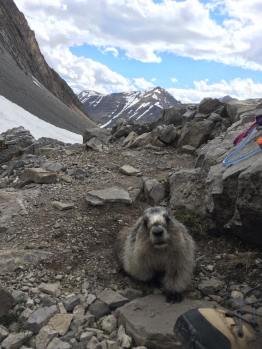 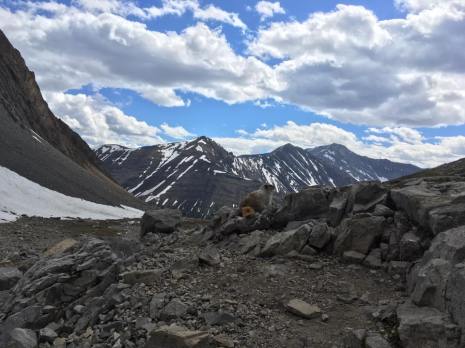 Eventually we get to the big waterfall Nolan was so excited to see! We stopped here and had some snacks and talked about everything we saw. At one point, we had another little lunch buddy join us. A Marmot! The first time I saw a marmot, was at Yamnuska last spring, and naturally I freaked out because it was mountains, I had NO clue what it was and, I was just a chicken. Nolan gets to see one at age 3! This one, came RIGHT up to us, climbed over our shoes, our packs, tried to eat our packs and was EXTREMLY persistent. Nolan loved it, I asked him what he would name it and he said “Marmer” ha-ha. Marmer the Marmot.

After lunch, and after “marmer” decided to take off, Nolan and I made our way over to the water fall to play 🙂
More rocks, and more water, more rocks to throw into the water – all a boy needs!
We splashed around and played, climbed and just had a blast. I wanted to climb to the top of it but it was wet, slippery and I knew Nolan would follow so I had to calm myself and just stay put.
(“I’m a Gemini, I can’t keep calm”)
He really wanted to climb it as well, soooooooooooo we went up just a little to a nice spot where we could sit, listen and watch. Nolan felt so proud for his climb and thanked me for my help to the top 🙂 .

After all of our adventuring around, we started to make our way back down. There was another poop in the mountains, this time we had to hike a bit off trail and I remembered NOT to let him drop the rock on it. Lesson learned fast after the first time.

On our hike down, there were quite a few falls and trips. Some one was getting tired and it was

obvious. I know my son, attitude changes, voice starts getting more winey, and he gets very clumsy. It was time to get on my back, into the carrier and make our way down comfortable. What did I tell you – he was out within 2 minutes of being put on my back.

I was, am – so proud of my boy and thankful he shared this adventure with me and our friend. Our friend had been wanting to get out to the mountains for a long time and finally said yes to an invite so, it was a blast sharing it with them as well.

Back to the car we went, put the sleepy boy in his seat, and enjoyed a nice drive down highway 40 – home. Where shall we go next my boy? 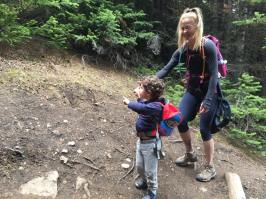 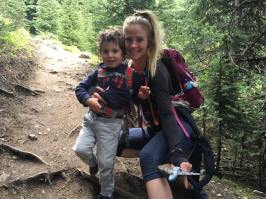 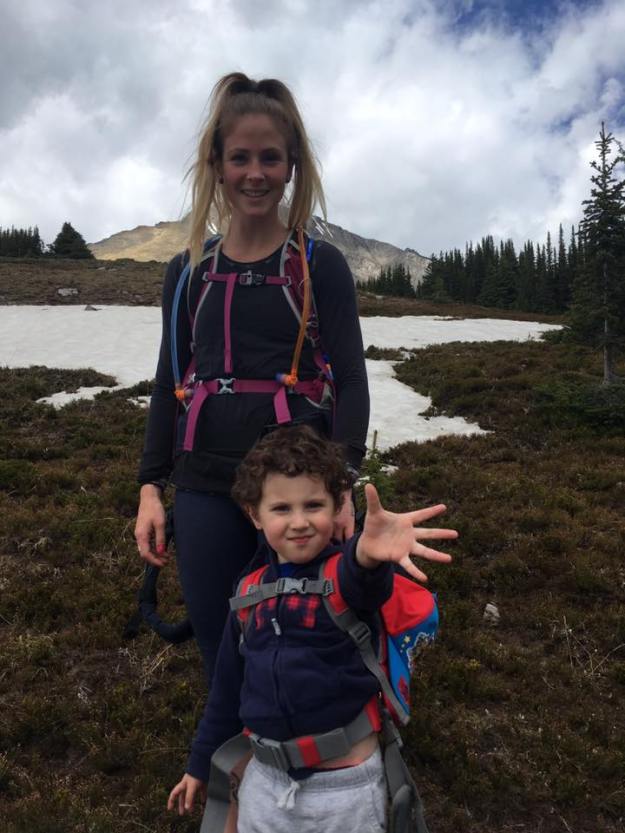 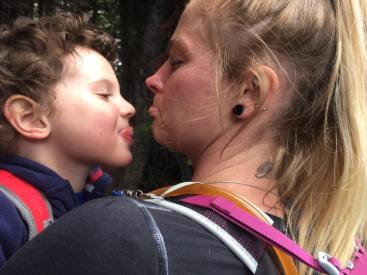 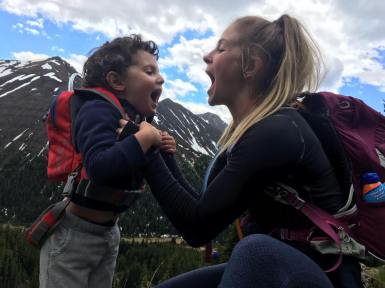 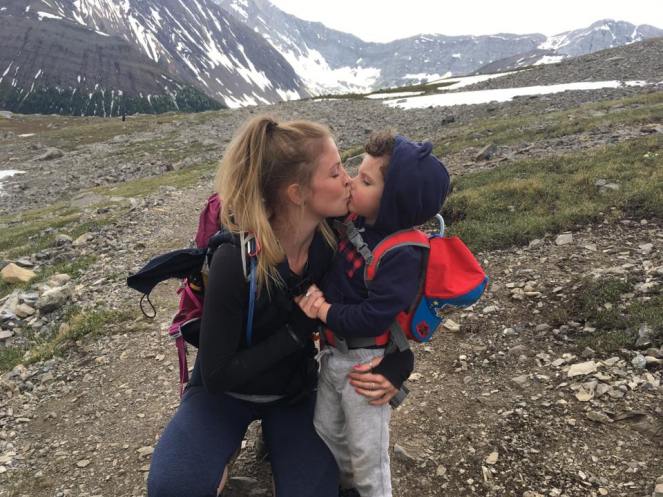 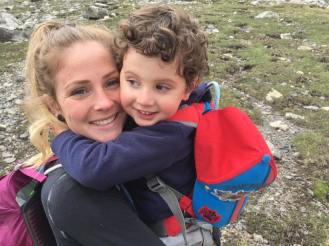 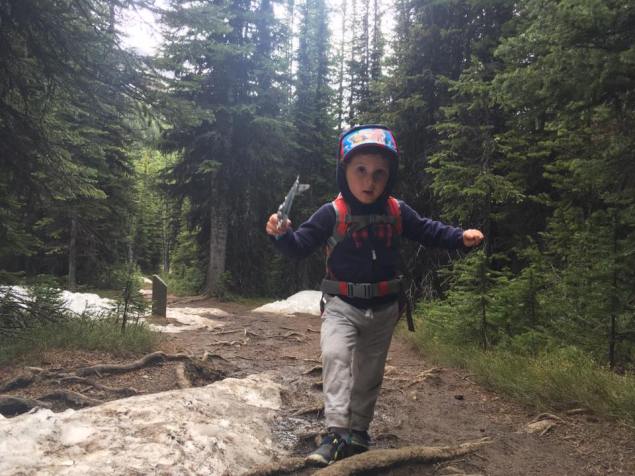 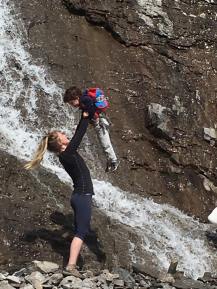 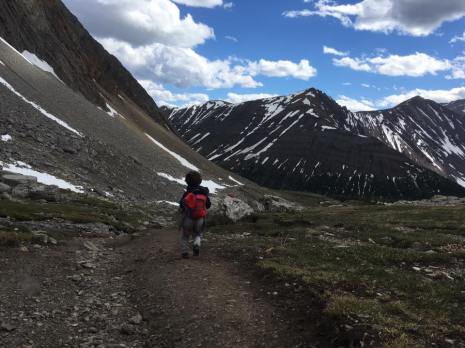 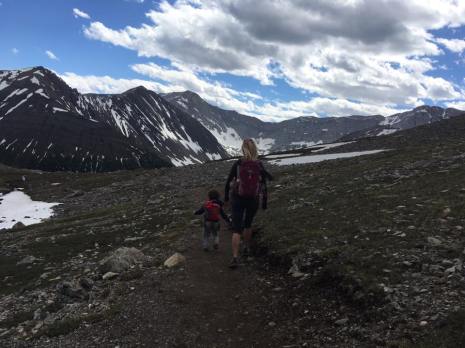 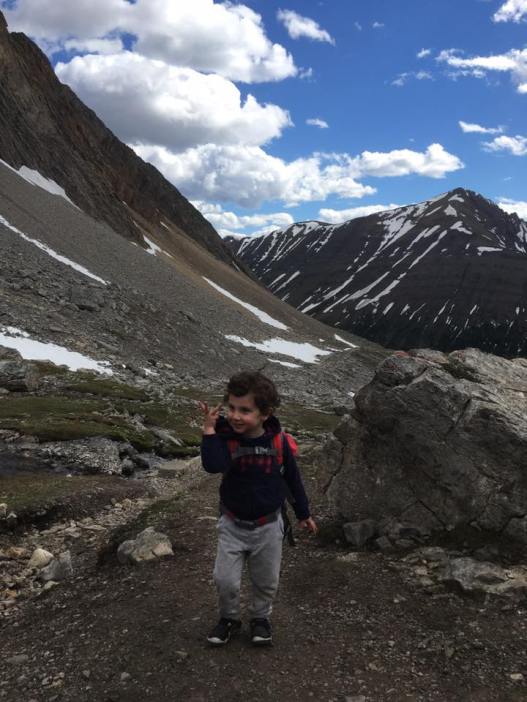