Tie Lake with our good friend, Mah-Cole, as Nolan calls her, Climbing out at Wasootch, Johnston’s Canyon, outdoor parks and more! 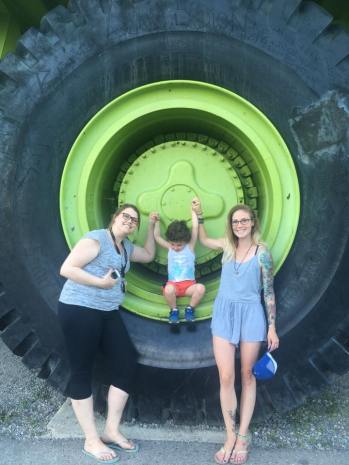 Last summer, we went to Tie lake a few times with our friend, and sometimes some of her family was there as well. 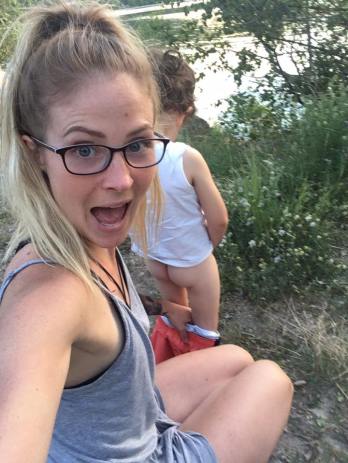 Nolan is my little road warrior and I have said that since he was born! He is the perfect travel buddy and adventure buddy.  We would always stop a the big giant truck as of course, we all loved it! Sometimes we would make other stops depending on who had to pee first! Often times, there were accidents on the road and we’d have to pull out of the long line of traffic so Nolan, or me, could pee on the side of the road, haha and hope we could wedge our way back into traffic. Sometime the 3-4 hour drive took 6-7! BUT this was – some of the best times last summer. We would just live like bums for the whole weekend and we loved it. Running around in bathing suits, getting dirty, eating what ever, when ever, 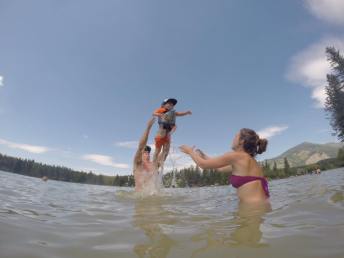 Nolan loved the lake. He never wanted to sit down for food or a nap, or even bed time. You knew he was having the time of his life with the massive temper tantrum that would follow when you tried to get him to do something that took him away from his playing haha.

The kid loves the water, and more than that, he loves it when people throw him “To the sky” as he would say, and then another person would catch him haha. He definitely gave everyone a workout! He was the life of the party.

We would go paddle boarding in 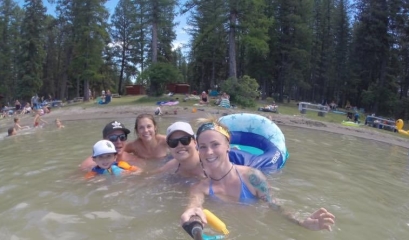 the afternoon, and both times, he fell asleep on my lap almost instantly. We paddled around for nearly – an hour and a half to two hours the first day, before he woke up. He wanted to go on our friends Uncle’s boat for the way back and told me to race him haha. The second day, he woke up and wanted to help me

paddle back. He really is the best adventure buddy. We had SO much fun together. Even in the evenings, all he wanted to do was be in the water. I think he must be like his dad that way, haha because I have never been good in the water. His dad, used to play Water Polo at a high level back in Venezuela, and I remember when we would go on trips to Mexico, he would always be out swimming in the ocean while I wanted to at least be touching and have the water no higher than my waist! HA! Definitely got it from his dad.

Evenings were beautiful here. The sunsets over the lake were something you just couldn’t take your eyes off of.

We definitely slept well every night as Nolan had every one running off their feet all day every day. 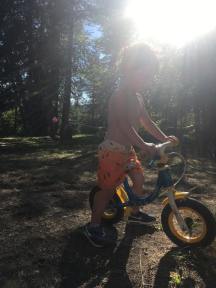 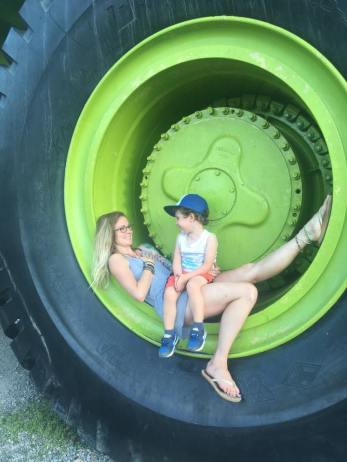 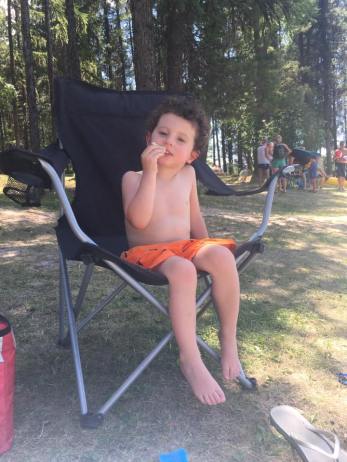 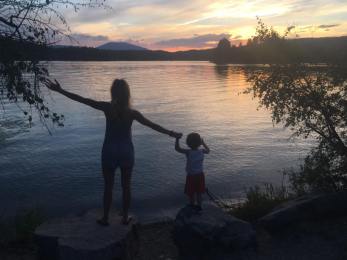 Nolan had said he wanted to try climbing his own mountains outside, so a friend and I decided to head to a nice crag not too far out to see how he would enjoy it. I also enjoyed a simple crag day. Nolan still isn’t a huge fan of the ropes, maybe doesn’t understand or trust that he wont drop, but I just let him go at his own pace. It was the

CUTEST thing and he enjoyed doing his own thing.

When he didn’t want to climb, he was happy to play in the dirt and cheer us on. It was one of the coolest days, I couldn’t believe I was out there, sharing these experiences with him. It makes me wonder.. when everyone sits there and says kids hold you back, my situation is the opposite.
This little boy is shaping my life into the most amazing time and I couldn’t have ever imagined I’d be doing the things I’m doing today, AND experiencing it with him, and sharing it with him. Life is SO much better WITH him. Thank you baby boy! 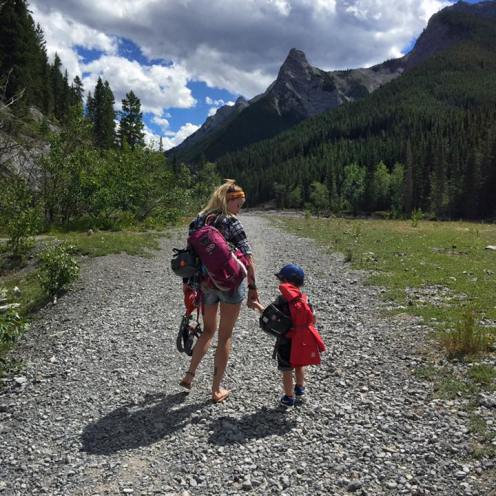 For someone who grew up going to Banff a lot as a child to see her Great-Grandparents, I have never been to Johnston’s Canyon! Until this day that is, and there was no one better to share with, than NOLAN! He loves waterfalls and wanted to see some so badly. When we saw them, he kept saying they were his waterfalls. 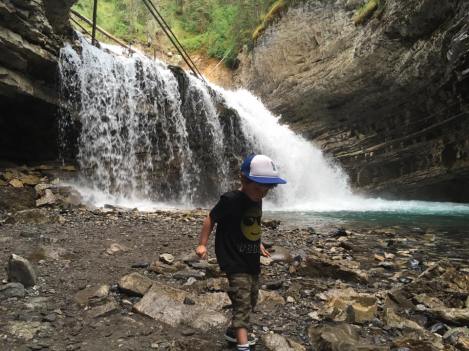 I don’t know why, maybe he was tired but I am pretty sure I carried him the entire way to the falls, and then on the way back down, he thought it was hilarious when I would sort of…. gallop down so it was easier on my knees and I could just use to momentum I had from his weight… and keep going. He would KILL 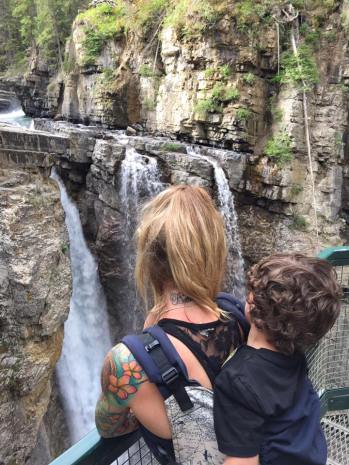 himself laughing, hysterically (I’m laughing as I write this recalling this moment) and saying . .
“Giddy up pony”! haha, what a kid! Eventually, he wanted to get down and run down the pathway himself. He had to pee so badly, that when we got to the bottom, he was running and immediately STOPPED, whipped his pants down and started peeing. A lot of people laughed as I RAN to catch up to him and put him on the side of the path, mid pee. Haha, never ever a dull moment in this moms life 🙂

After visiting Johnston’s canyon and being Nolan’s personal pony, we headed to Banff,

where I wanted to show him my Great Grandparents house and totem poles, because he always asks me about my tattoo on my arm. He used to think I had a monster on my arm, but as he gets older, he understands that someone in the family made it, and Mommy thinks its pretty special.

After our day of adventures, We went in search of our favorite – BLUE Bubble Gum Ice-cream! 🙂 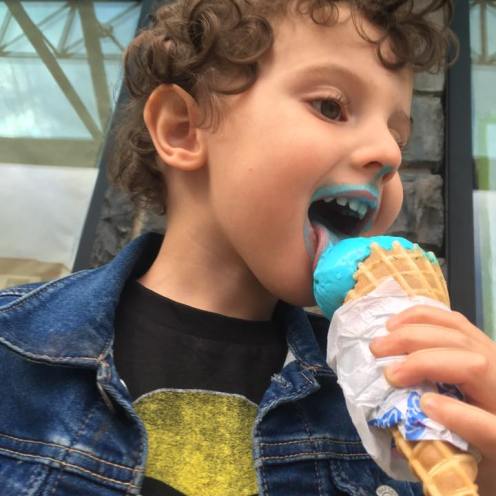 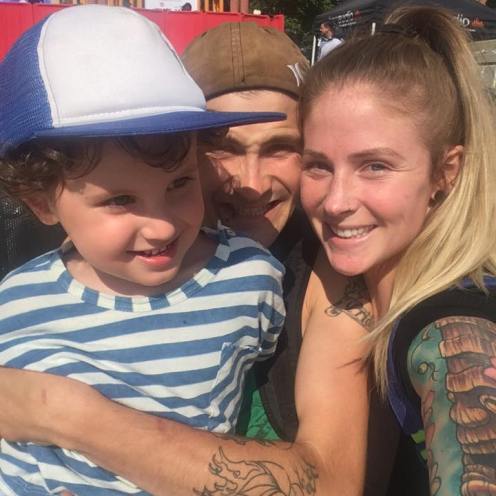 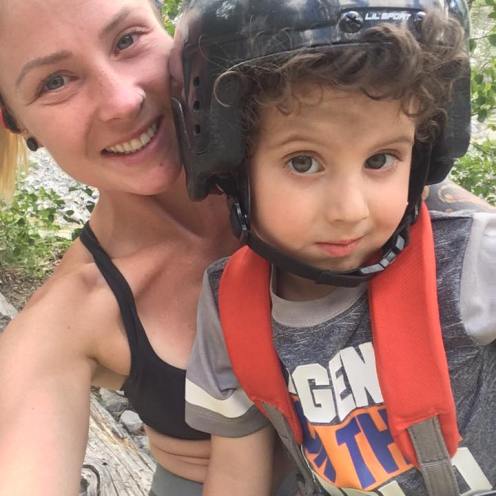 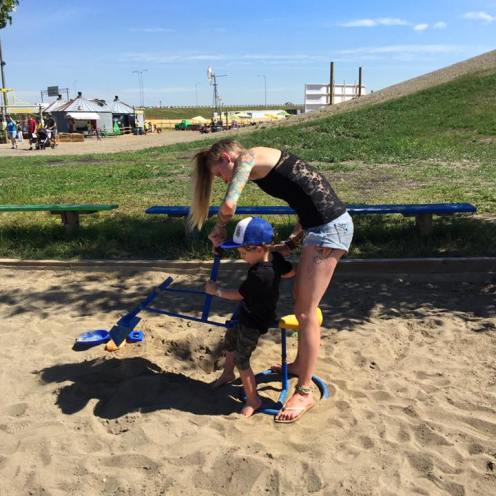 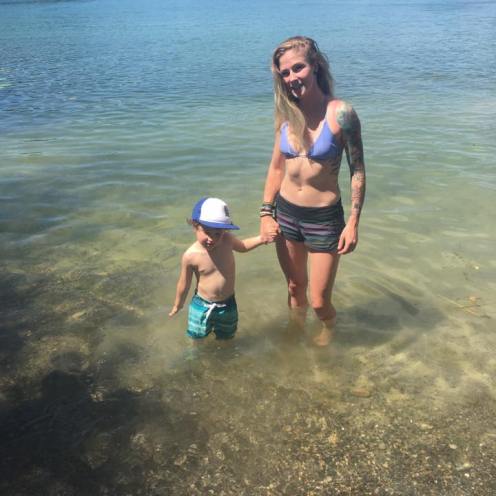 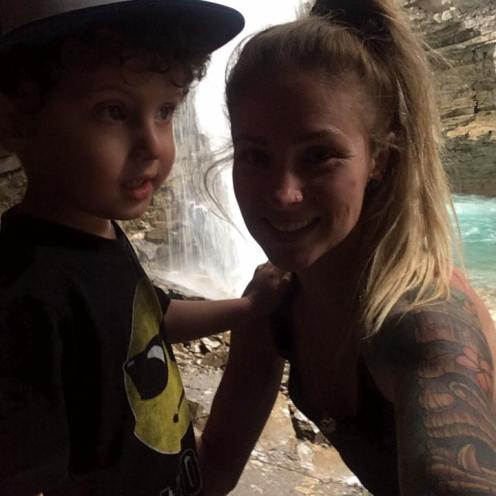 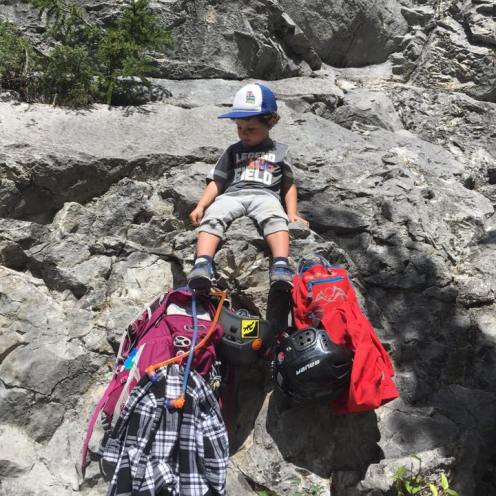