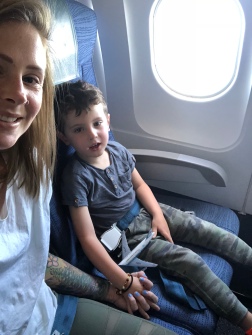 2018, Nolan’s Grandparents had asked to take him to Mexico with them for his Grandma’s birthday and his Dad and I said sure, why not! Then, a week later – he was on a plane AGAIN, to Mexico with ME! At first, I had booked the trip for myself, as I thought Nolan going again – a week later wouldn’t work. Then his Dad asked me if I was going to take Nolan, and I asked “would you mind missing out on time with him for another week”? Then he responded with – Just go and enjoy, so that’s what we did 🙂

Originally, the vacation that I had planned for Nolan and I, was a month long road trip from Calgary, to the East coast. Time went by too quickly and I just couldn’t

get the planning together in time. AND – family didn’t want me driving across the country by myself with my boy. They were not worried about me and my driving, they were worried about other people. I would be lying if I said that didn’t discourage me a bit. I will not let that happen again though, next time I plan our cross country road trip, it’s happening. It’s always been a trip I want to take and it’ll happen!

As it is with every trip, I had my luggage bag out and was packing the week leading up our trip because I was SO excited! Luckily, Nolan’s Grandma had everything washed and repacked from his trip with them the week before, so she just gave me everything they took which worked out perfectly!

We were up early on Friday morning, and Nolan’s Father and Grandma took us to the airport. I was SO nervous because I have always travelled with Nolan’s father and he took care of getting to the places we needed and our tickets. I always felt safe with him.  Once we arrived at the airport, he helped us get checked in and told me where to go while I freaked out haha. We made it through our check in’s and security, and then headed to sit for a while with our coffee, juice and breakfast that his Grandma had made for us.

This was it! IT WAS HAPPENING! I felt so proud that I was actually taking my son on a trip. Dreams were coming true! We made it onto the plane just fine and ended up sitting with a lady from Korea. We were headed to Montreal first, where we would switch to another plane and head to MEXICO! Nolan and I ended up laying down on the two seats we had, my legs going up the window side, and Nolan passing out on my stomach. Good thing we are both small people. The lady sitting beside us though we were so funny and she loved Nolan! She didn’t speak English, so we were talking with each other through our translator apps, it was REALLY cool. She was with a big group and they were all touring Canada. They had just come from Calgary, Banff, Lake Louise and all those beautiful touristy spots.

Once we landed in Montreal, I Nolan on my back, our backpack carryon – on my front, and we ran to get our luggage. Once we got our luggage, we had to RUN to the other rise of the airport to get on the next plane! That was my first time in the Montreal Airport and it was not small! We made it, boarded and had a whole row to ourselves. So, yes, we took full advantage of that and laid down to sleep again.

At last, we arrived in Mexico! I was doing so much better than I thought I would, but maybe I was able to keep calm because I had to for Nolan. We made it through the check in, I didn’t lose anything and we got our bags and made our way to the bus. There were a few people on the same bus who were staying at the same hotel as us, so that was nice knowing who to look for when we were to head home.

I remember there was a guy and his girlfriend, from Montreal, and he had taken his parents to Mexico with them for the first time. There were two girls who were very nice as well, they wanted to party – you could tell haha. Then there was an older couple who was hilarious, because the husband spoke English but the wife didn’t, so he kept making jokes. (Not mean ones).

We arrived at the hotel in the late afternoon and checked in and finally made our way to our room with our bags. This hotel looked huge! By the time we go dressed and went to eat, it was getting dark. We ate, attempted walking to the beach, but like I said – it was a big hotel – so we headed back and went to bed so we could enjoy the first day!

Up and at em! We head for breakfast, and then head to the group meeting with your travel person, and figure out your ride home etc. 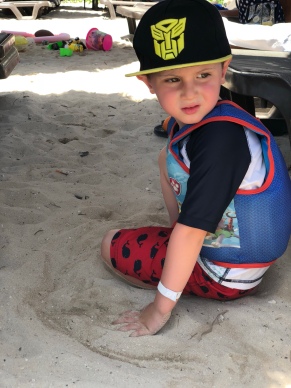 That took about an hour and then we headed to the beach after that. Nolan loved the pool but didn’t want to go into the ocean. There was a lot of seaweed along the shore and people cleaning it up, so we stayed in this pool by the beach. Nolan just wanted to keep running and jumping in and it was tiring in that heat, but a lot of fun. After a few hours of fun, I tried to get us cleaned up to go get some lunch and had taken Nolan’s life jacket off. He was NOT happy with me. Trying to get him out of any pool is … the end of his world or something. Trying to get him, his toys, our bags and.. just all of it, and keep the sand out of it all was not working out. Nolan took off and ran and jumped into the POOL!!!!! WITHOUT A LIFE JACKET! I of COURSE saw him take off and booked it after him and jumped in after him and dragged him out, and FREAKED out! I don’t think I’ve ever had an incident where I have been so scared with him. . and I tried to remain calm with him and tell him why he COULDNT do that ever again. He was sad and apologized, but I just didn’t want him to ever do that again – and he didn’t for the rest of the trip.

After lunch, we ended up at the kids park which is where we pretty much remained for the rest of the trip. It was shallow and plenty of slides. Spots for me to sit and Nolan to play or for me to join him in the shallow water, and a pool where he could jump in on the other side of that pool. It was the perfect spot for us.

Most of our days were spent at the kids pool. We made a few friends, one couple from England and their son who was a year older than Nolan. We actually met them at dinner one night, when we got rained out on the patio and ended up moving inside and brought our tables together. We went to a few shows with them over a few nights, spent a few days at the pool together as well. We met quite a few people and families, but they stood out to us the most.

We tried to make it to the shows every night and Nolan enjoyed watching them while he sat on my lap. After the shows, we would head back outside and enjoy some live music, games and dancing. Nolan could stay up till mid night every night, running around with other kids and people. I would have to carry him out of there on my back and he would be passed out b the time we made it back to the room, every night.

The last three days of our trip, it was thunder and lightening and crazy rain storms, so we didn’t get to play at the beach or enjoy the pools. (Because of the lightening). We walked around a lot with Nolan on my back and an umbrella, keeping us close and dry. We played in the lobby – some games but that got kind of boring fast. We would go explore more, I tried to get him to the ocean some more, to see the beach but he still wasn’t keen on it. We would ride the little hotel train, ate lots of food, went to the little café on the resort a lot, and took a few naps! 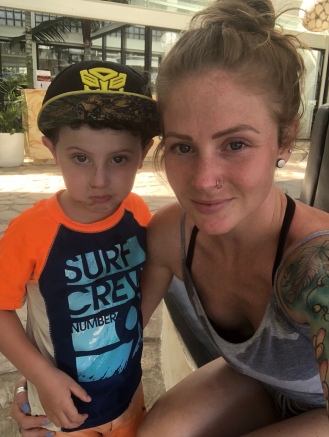 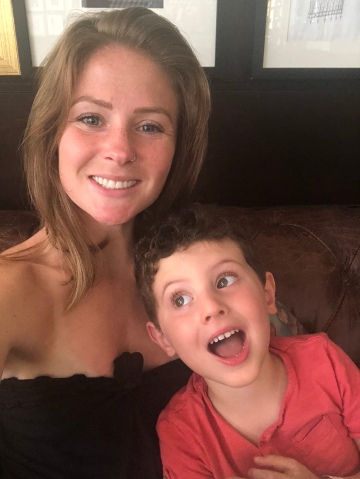 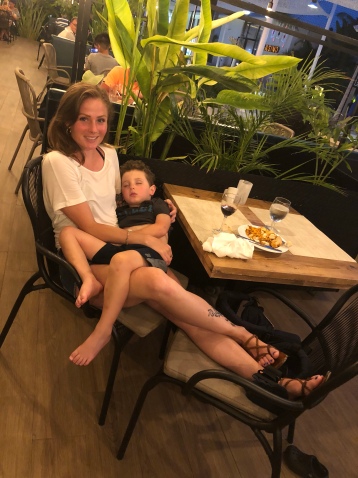 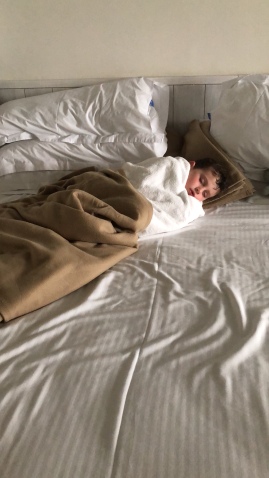 The day we had to go home, we had a lay over. We got to Montreal and the family we had met, really didn’t want us to sleep in the airport. 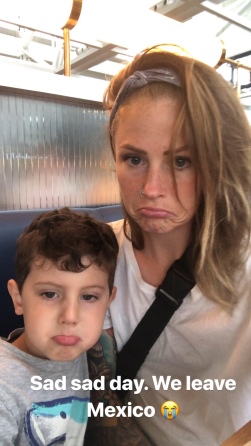 So the guy and his girlfriend quickly ran home to drop his parents off, and then came back to get Nolan and I. They asked us if we wanted to eat, shower and sleep – or if we wanted to see some one Montreal. I asked Nolan, and of course he wanted to stay up. It was already midnight when they had come back to get us (we arrived around 11 in Montreal from Mexico) so they took us for a walk around a doc and market in one spot of Montreal, it was all cobble stone roads and old buildings with tiny roads in-between.. . it was beautiful! They took us to this Ferris Wheel, and then to this awesome poutine place which was packed at 230 in the morning! Then they took us to Mount Royal, and we got to look over Montreal. After our quick tour around some of Montreal, we had to head back to the airport. Nolan stayed up for all of this!

We ended up back in the airport, snuggling up on some benches while we waited for our flight home. It was the best trip EVER and I cant wait to do it again with him ASAP! 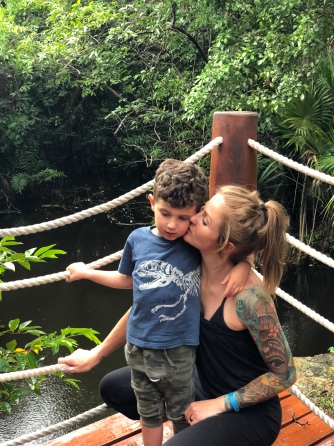 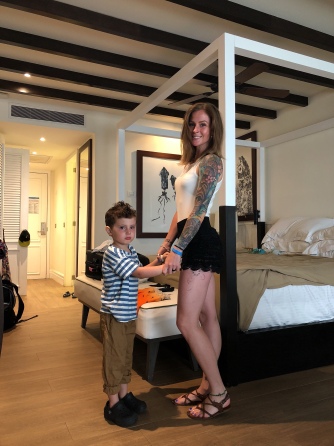 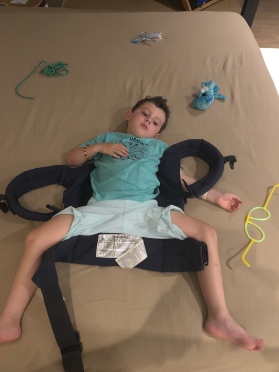 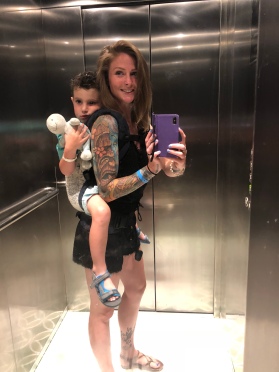 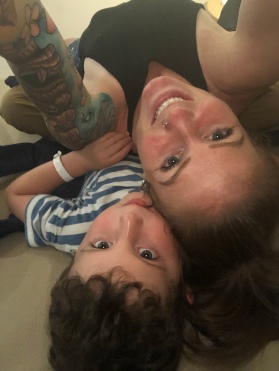 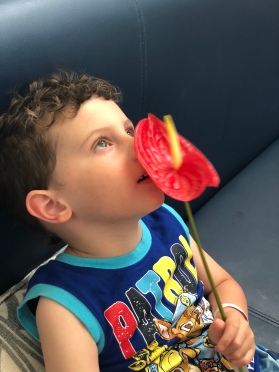 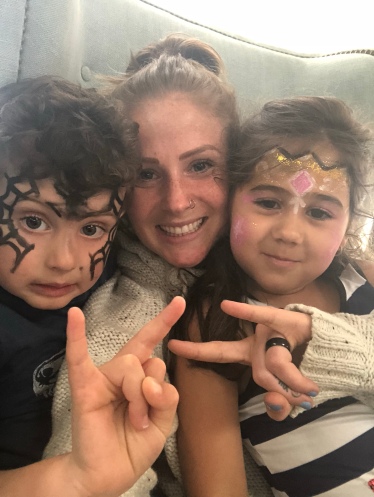 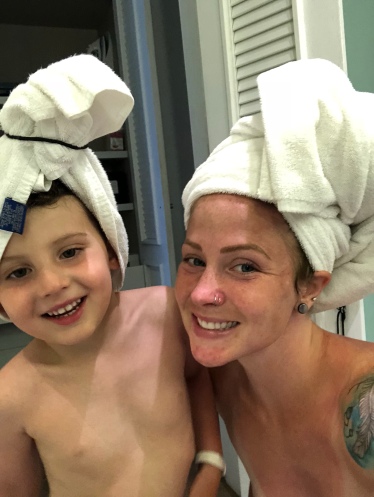 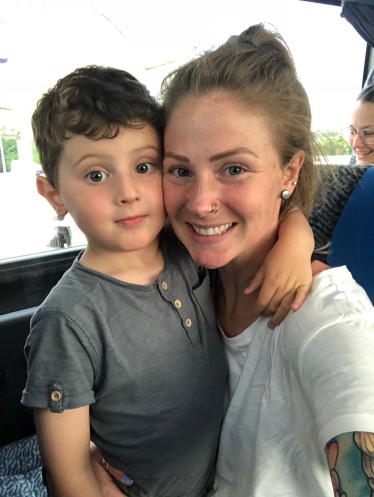