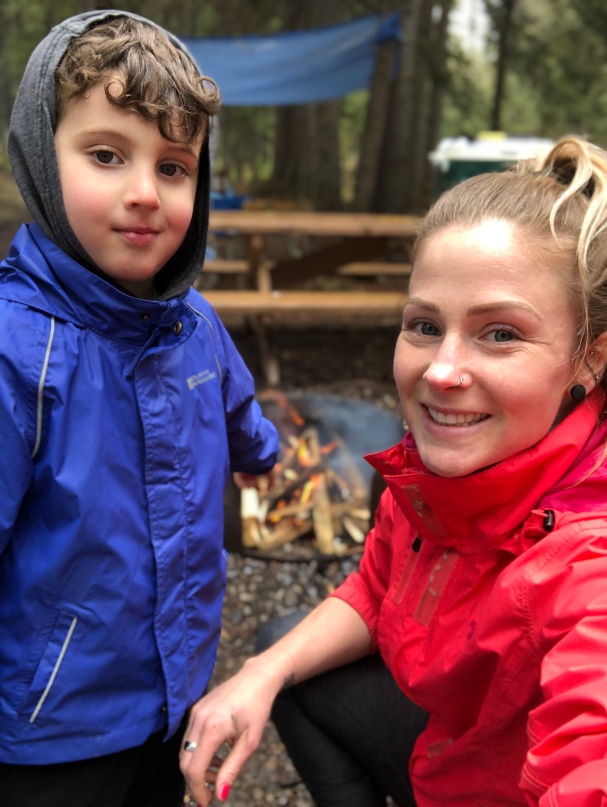 We had been talking about it for a while, how exciting it would be to camp in the jeep together. After all, we are both pretty small and its a perfect space for us to do so. So one week, while at work, I just decided to bite the bullet. I went to my dad’s and picked up a few old items he had from when he was younger, and went and bought a few extra things as well. We were also lucky to get a few more items from Nolan’s Abuela.  We loaded the car that Friday night, so we could head out early Saturday morning.

Even though the weekend called for rain, mostly on the Saturday, we didn’t let that stop us. I wasn’t sure exactly, how this trip would work out, but I knew we just had to do it and go with it. We drove out towards Canmore, and found the Three Sister’s Campground, that was

first come first serve. It was kind of nice that is was raining, because it was pretty quiet there and we had a lot of sites to choose from. Our site was a perfect one, across from the river, with a nice view. We worked together setting everything up, and I was able to quickly get a tarp over our table so Nolan could sit and play his little game while I got everything else set up. He didn’t mine the chilly weather at all, he was bundled up in his rain boots, sweaters and rain jacket and mitts.

After we got settled in, we walked around the campsite to check it out, and do some puddle jumping. We realized that we had forgotten to buy marshmallows, so walked to the gas station by the highway and picked up the LAST BAG there. Marshmallows are of course a must! We walked back to our site and I started chopping wood so we could sit and relax, and eat. I quickly learnt that I needed an axe with a longer handle, not the hatchet style. Nolan, my hilarious little cheer squad – “you’re not doing such a good job mommy, you need help” ha! I died, he wasn’t wrong. We saw a family across the road from us, and the kids were chopping wood FLAWLESSLY! Nolan made a point to tell me how much better this kid was than I, and we just laughed. Eventually, I think the man noticed I was struggling, with Nolan’s extreme loud laughing carrying through the site, he came over and offered his axe to me. It made a WORLD of difference. So, I made sure I chopped everything before I had to give it back. 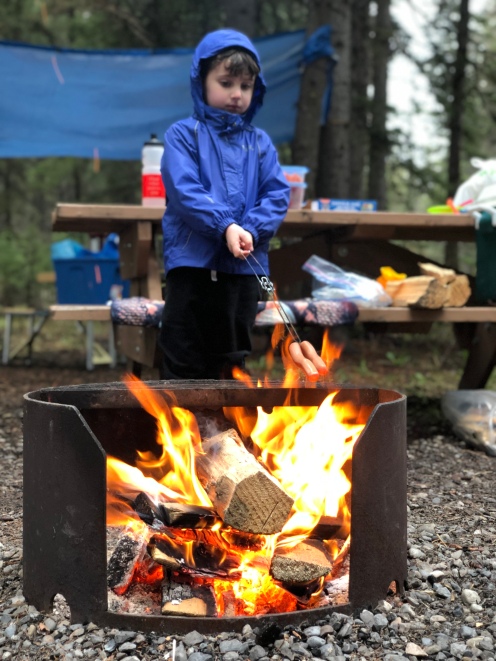 After that, our fire was a success. It started without an issue and we were well on our way, eating pretty much just hotdogs and marshmallows for the day and night. It was a lot of work setting everything up, getting the fire going, keeping things dry and Nolan entertained and fed. He did great and really had fun. 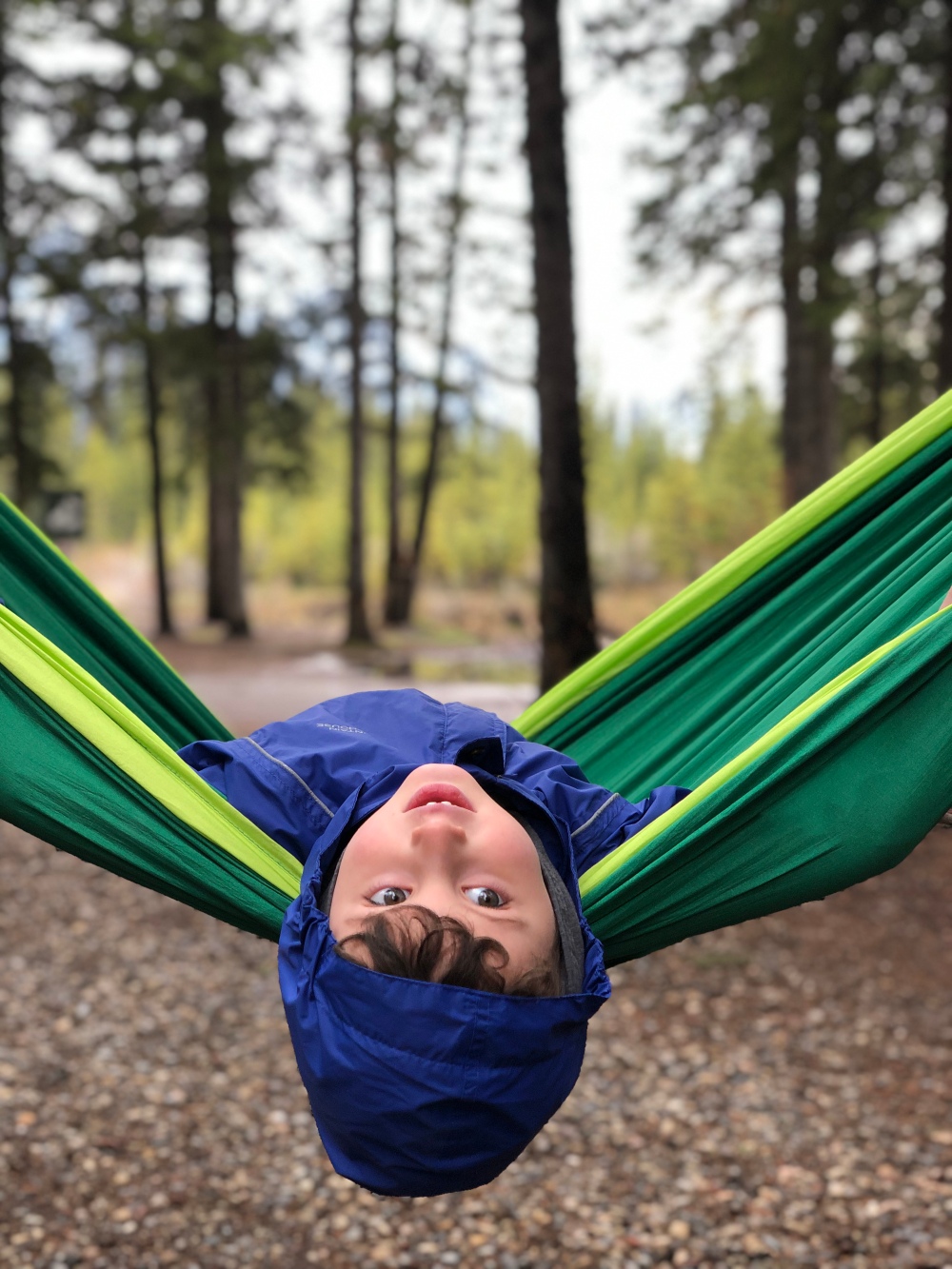 Once the skies started to clear, we set up our hammock in the trees and hung out there, doing thumb wars over and over again. We snuggled up and told stories about what we saw, heard and smelt, and just laughed together. It was perfect, I felt REALLY proud for making this all happen, and doing it all, just the two of us. I’ll say it over and over again, but he really is the best adventure buddy. 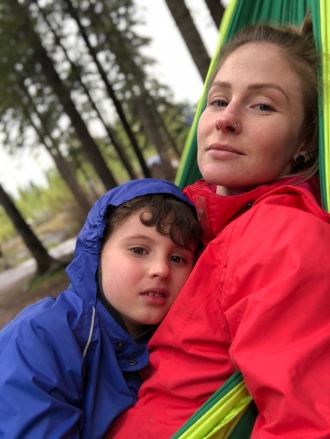 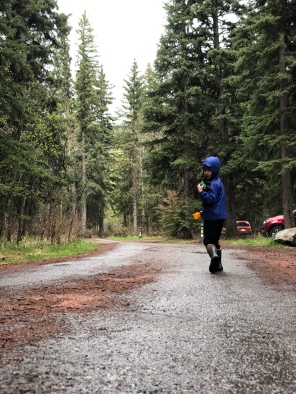 The day consisted of adventuring around the site, puddle jumping, playing a little board game we brought, eating hotdogs, over and over again, marshmallows, hammock hangs and thumb wars, and more! When nighttime came, we cleaned up the site and brought all of our food in, and made our beds for the evening. We brushed our teeth over the fire pit, and snuggled in. It was SO nice and cozy together, we read our little book and then went to sleep.

I hadn’t thought through, how a midnight pee would go, but when it came, we both panicked haha. Nolan didn’t want to go outside and I sure didn’t either. Poor kid had to unzip his onesie, and go out of the jeep, while I hung out over top of him, franticly shining the flashlight in every direction. When he was done, he quickly got back in, zipped up his clothes and climbed right into my sleeping bag. That was a tight squeeze, but oh-so-warm.

In the morning, we got up, cleaned up and Nolan asked if we could have breakfast in the mountain town. So we did just that. We headed out to Canmore, and had breakfast at Good Earth.

Nolan still didn’t want to go home yet, so we walked around a in Canmore, along some nice pathways and eventually made our way to a playground. Eventually, we made our way back to the car to head home.

As we were leaving the mountains, Nolan starts crying. I asked him what was wrong and he said “I don’t want to leave the montanas”! I tried to hold in my laugh and smile, but it was the CUTEST thing. It was a huge flash back to me as a kid, every time we would leave my Great Grandma’s house in Banff. As soon as we got out of the mountains and the land flattened out again, I would get SO upset and be soooo sad that we were going back home. I just thought it was sooo cute and funny how Nolan felt the same way, at the same spot I used to get upset at. 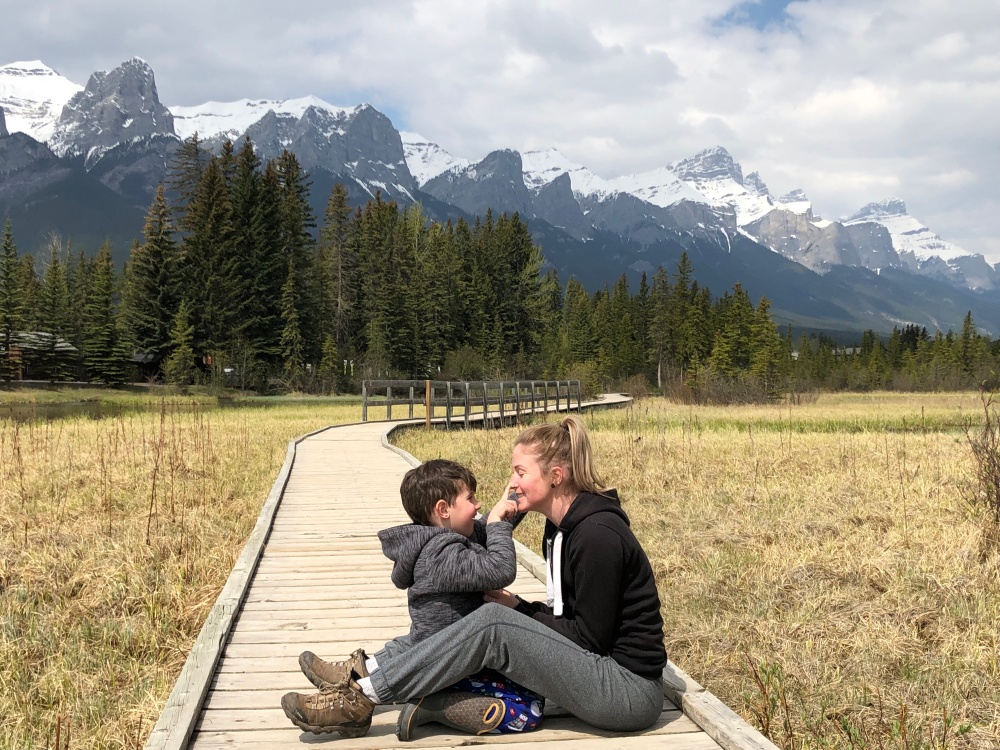 It was a great little trip, and an experience. I cant wait to do it again, and be better organized. Doing it by myself was definitely tiring and a lot, but I would do it again. Everyday Nolan is more and more helpful and he understands a bit better each time, that when its just us, we have to work together a lot. 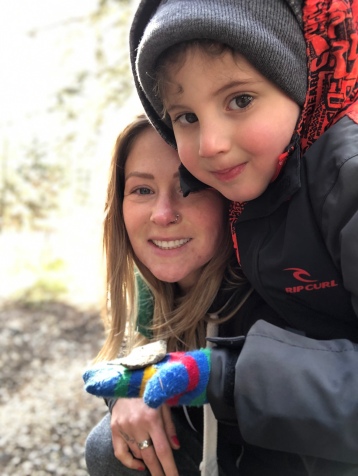 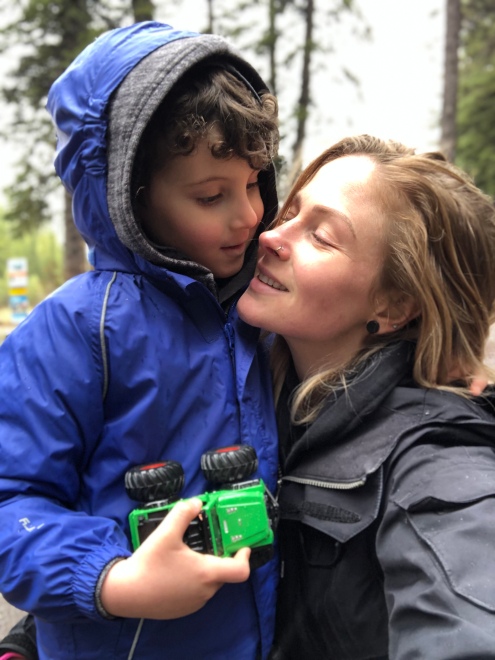